The common yellowthroat spends the spring in the United States and Canada and migrates to southern U.S., Mexico, Central America, and the Caribbean in the winter.

Do you ever wonder how animals survive the colder, darker winter months? While humans have electricity, grocery stores, and warm clothes, life in the wild without these luxuries becomes a little more difficult. What do animals do when the temperatures drop, and the flowers and berries disappear?

Local animal species have developed adaptations, or characteristics, that help them survive in our Pacific Northwest climate and fluctuating seasons abroad. Every living thing has adaptations, including you! Triggered by seasonal changes, many animals employ adaptations like hibernation, migration, and growing thicker fur to stay alive. Let’s explore these survival strategies and some animals that use them.

When winter arrives, resources like plants and insects diminish, making it difficult for most animals to find enough food to maintain normal bodily functions. One way to survive leaner times is to employ varying degrees of seasonal hibernation.

Hibernation is an extended form of torpor, or short-term low activity that conserves an animal’s energy by reducing their metabolism (the process within every living thing that maintains life). During this time, most of the bodily functions an animal uses are extremely slowed or completely halted.

According to Michigan State University, hibernation exists in a variety of strategies from “true hibernators” to a “deep sleep” to an “occasional sleep.” True hibernators include animals like the hoary marmot of Mount Rainier National Park. 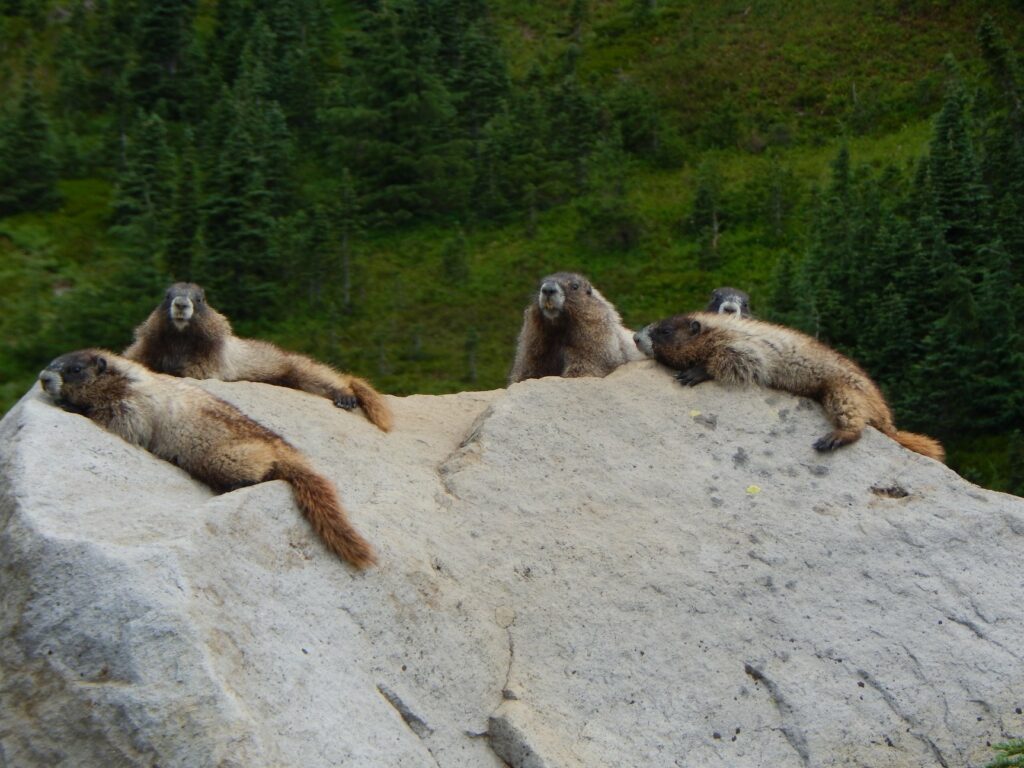 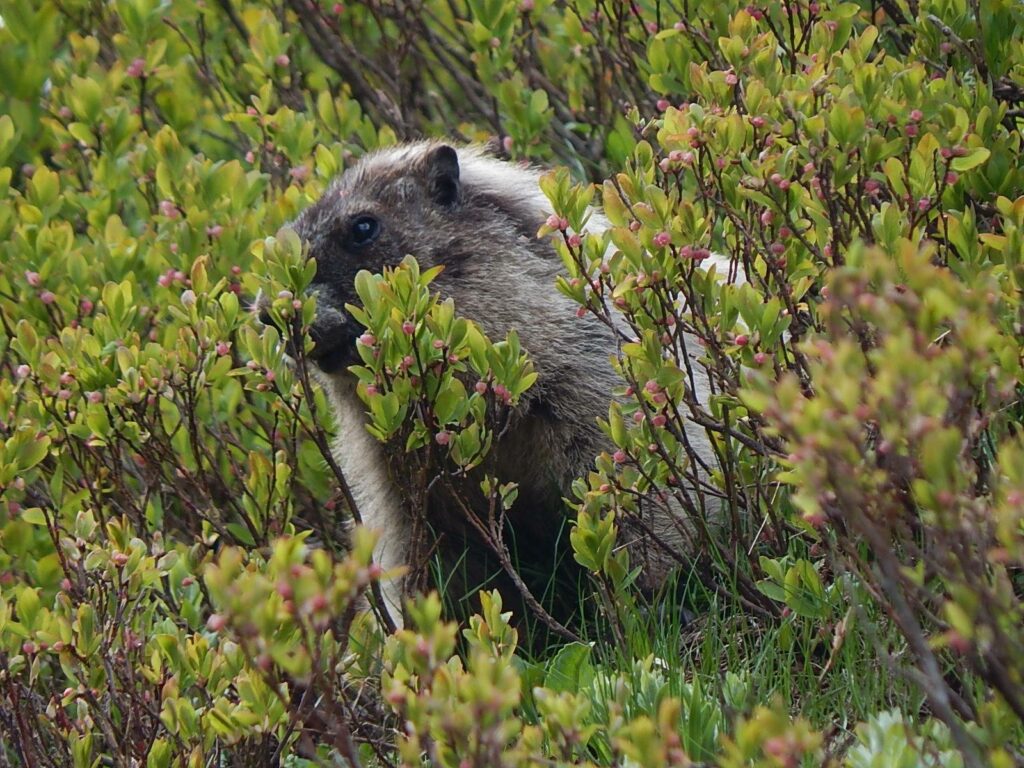 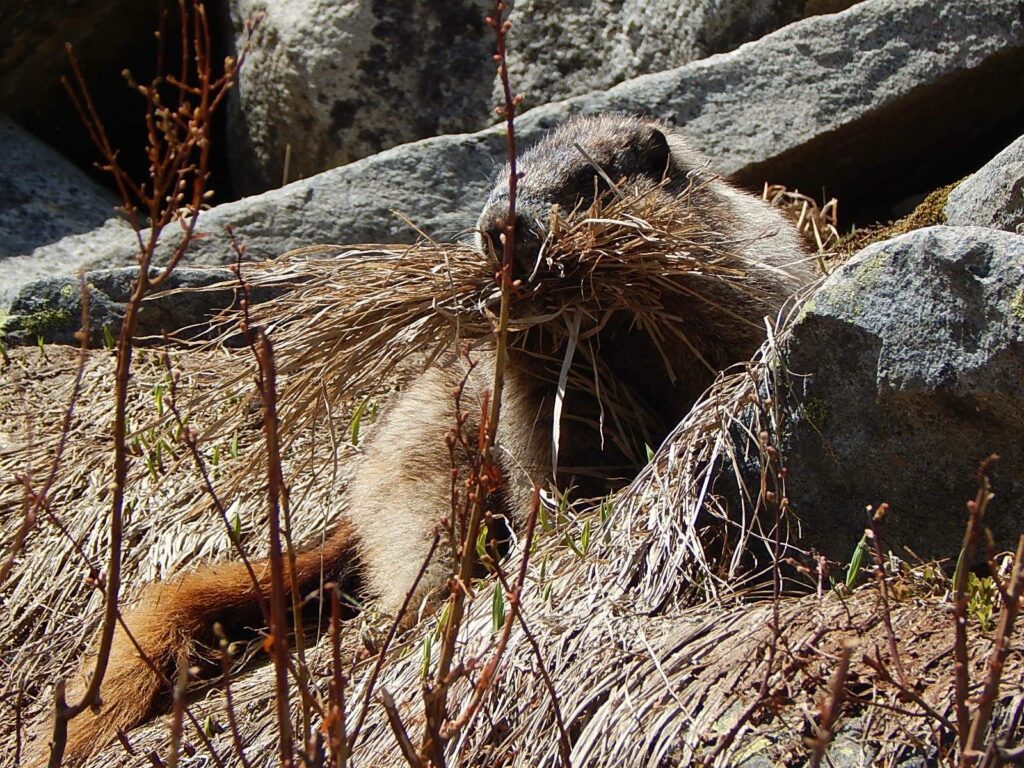 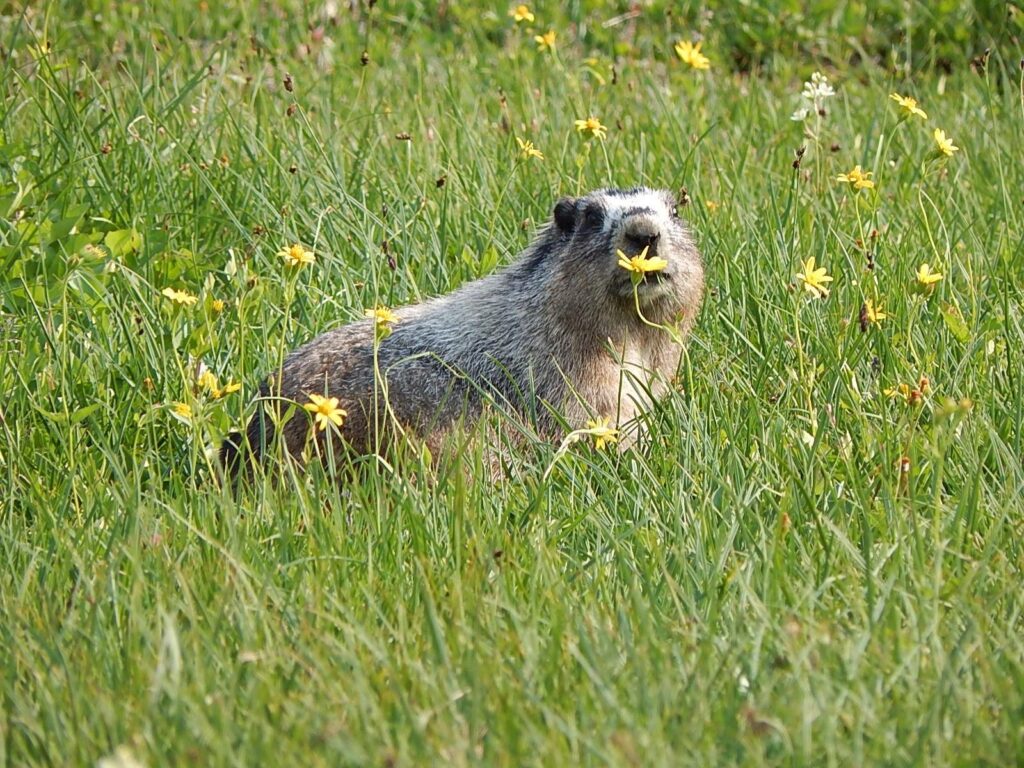 The American black bear uses a similar winter survival strategy, although their body temperature does not drop as drastically as other mammals like the hoary marmot. By maintaining a relatively warm body temperature, black bears can hibernate in their dens for months without eating, drinking, urinating or defecating! Amazingly, it is during these months when a mother black bear will give birth to two or three blind, helpless cubs and nurse them in the den until spring. 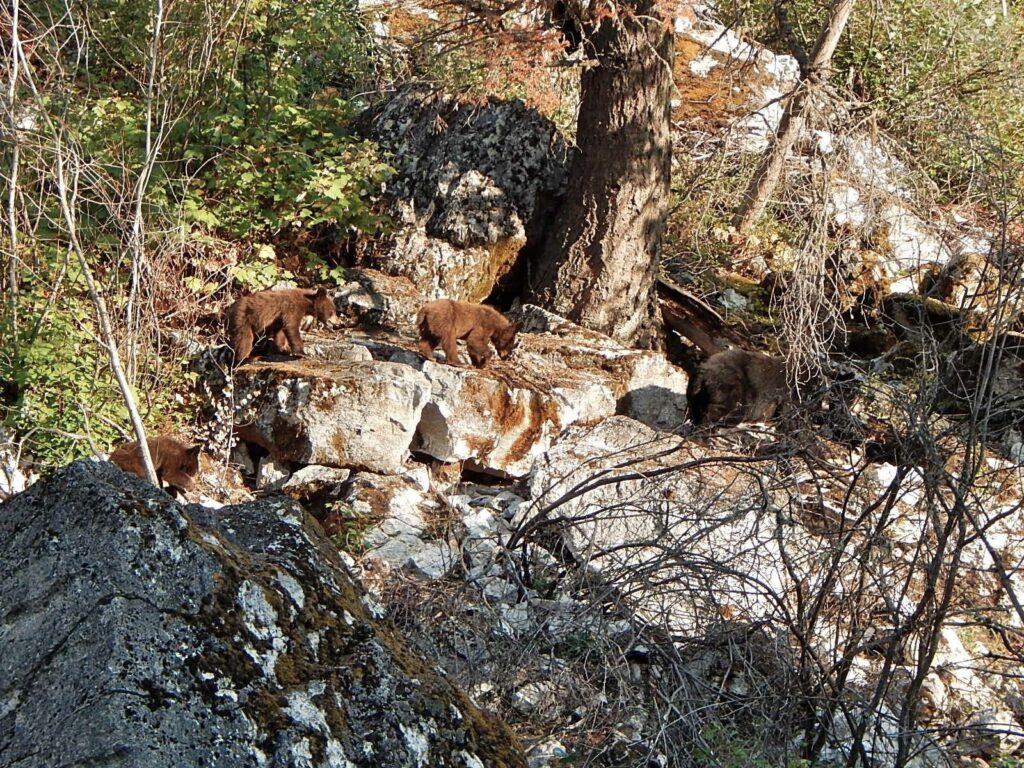 A momma black bear and her cubs. 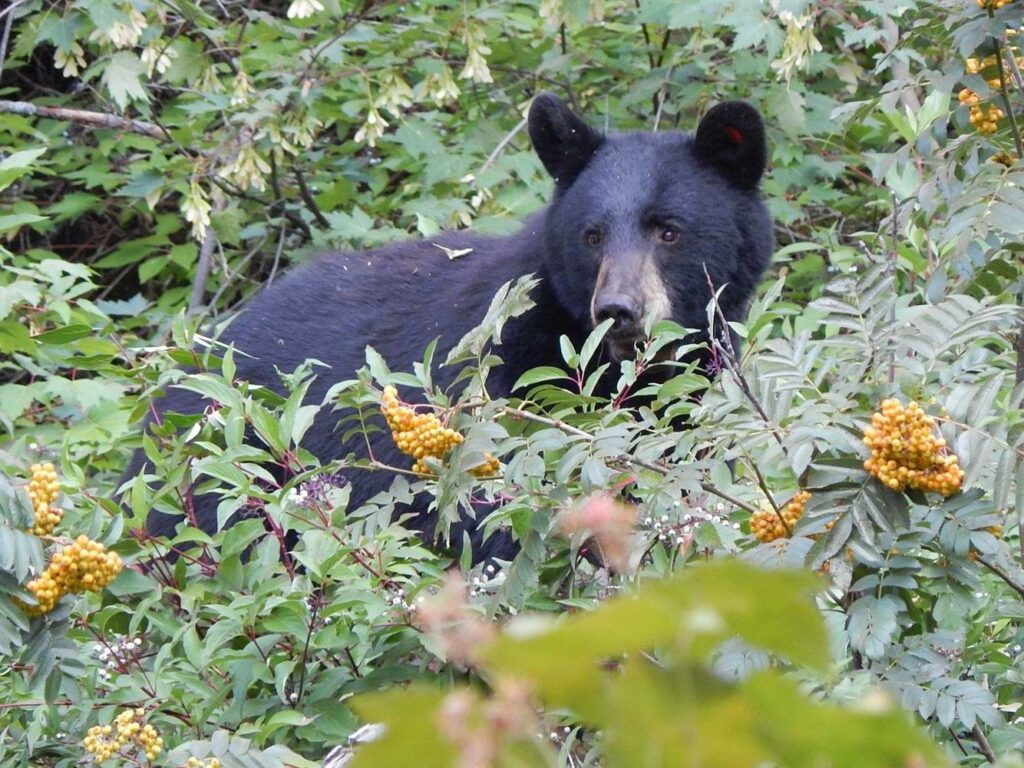 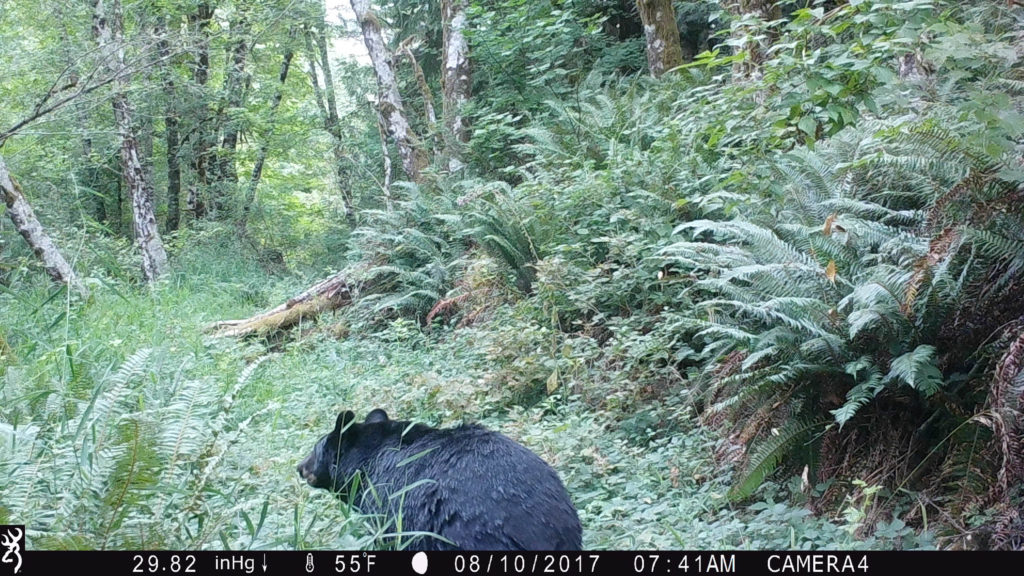 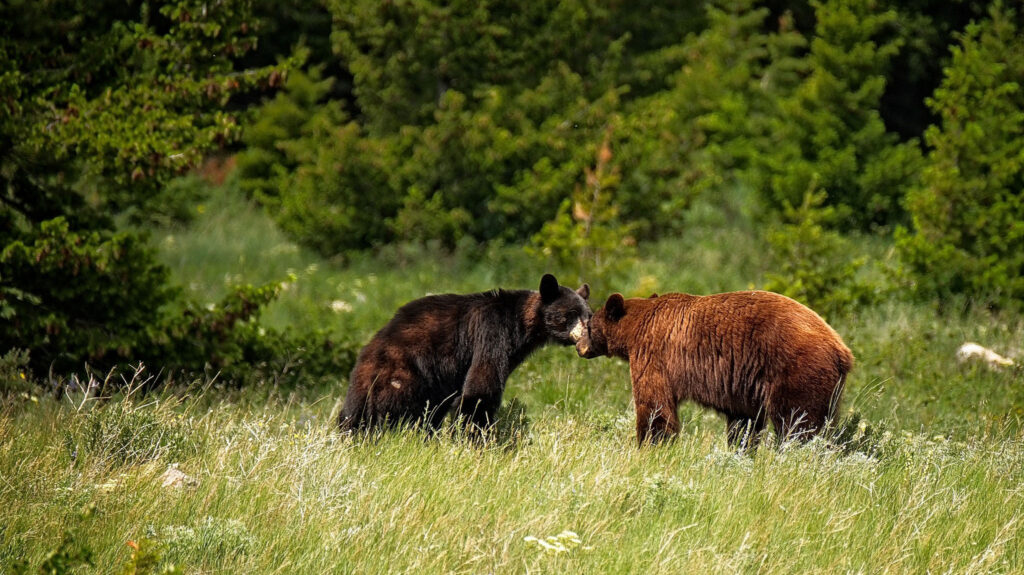 By utilizing these life strategies, the hoary marmot, American black bear, and many other species can ensure they have enough energy saved up to survive when they awake each spring. If only us humans could eat to our heart’s desire all summer long, then curl up in a cozy space for winter!

Migration is another survival strategy many animals use. Migration is the seasonal movement of animal populations from one place to another. You might be familiar with the characteristic V shape of migrating geese flying through the air at certain times of the year.

According to the Cornell Lab of Ornithology, more than half of the 650 species of birds living in North America are migratory. By migrating, birds can ensure they have a year-round supply of food, avoid the coldest temperatures, and find suitable nesting sites to raise their young.

The spring bird migration in the Pacific Northwest begins as early as March. We live in what is known as the Pacific Flyway, an important migration corridor for birds traveling north and south following food sources, breeding grounds, or traveling to overwintering sites.

Spring visitors that raise their young in our region of Washington include the osprey, rufous hummingbird, western tanager, and many warbler species like the yellow warbler. These species travel south in the winter and return in the spring. 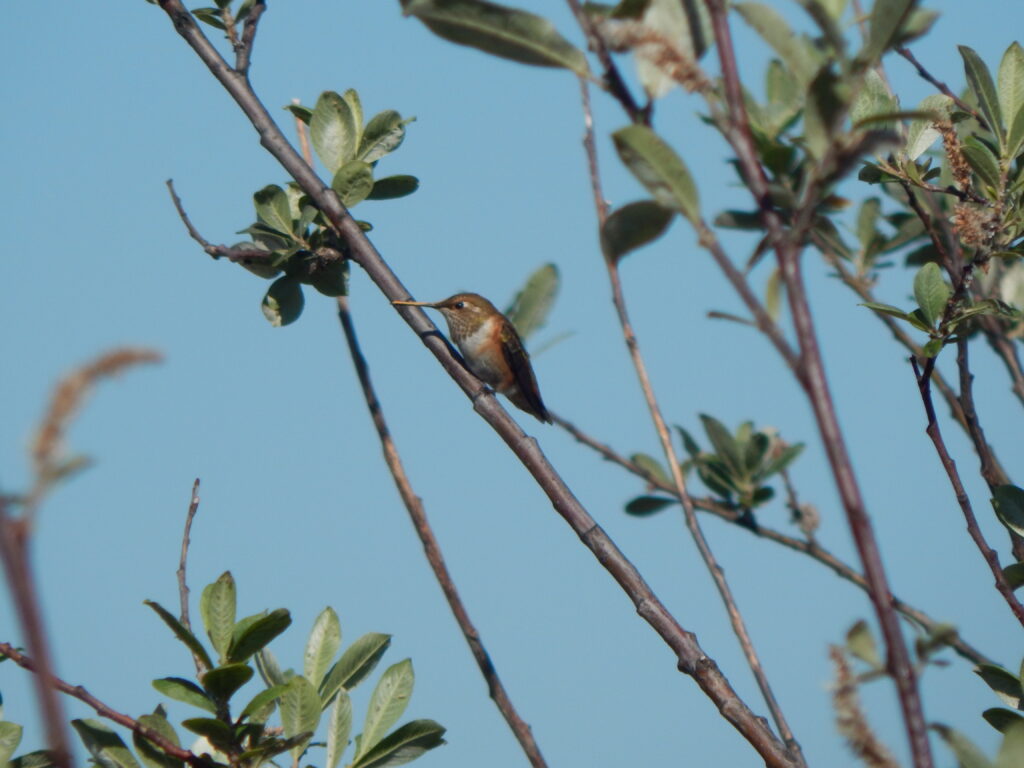 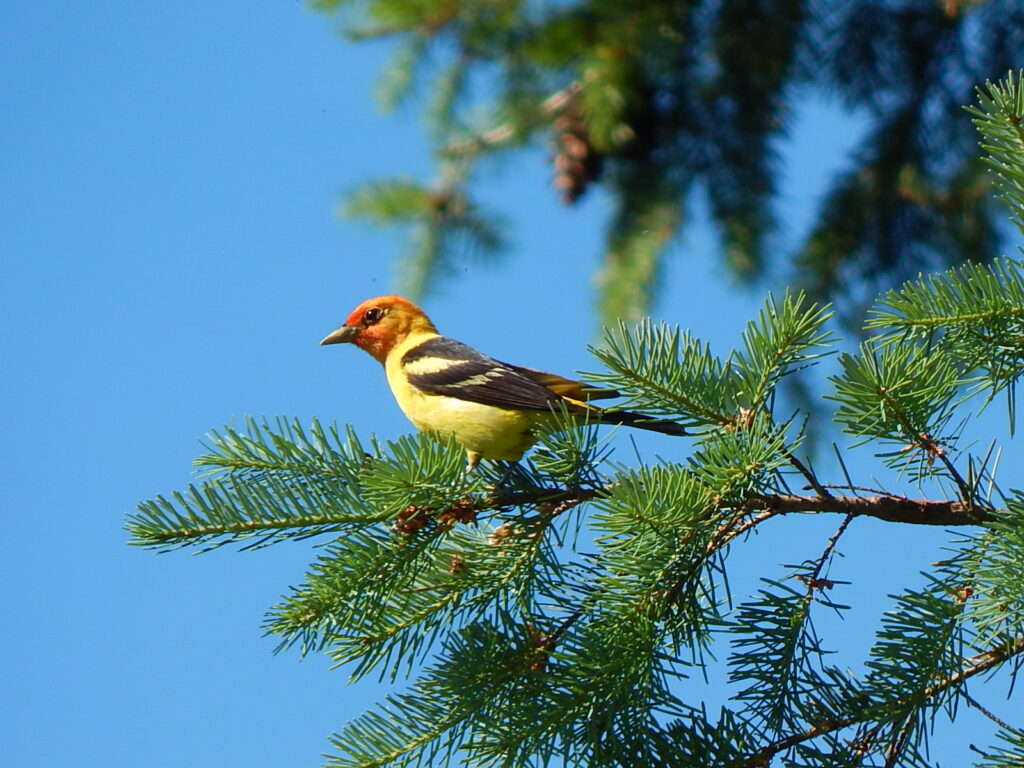 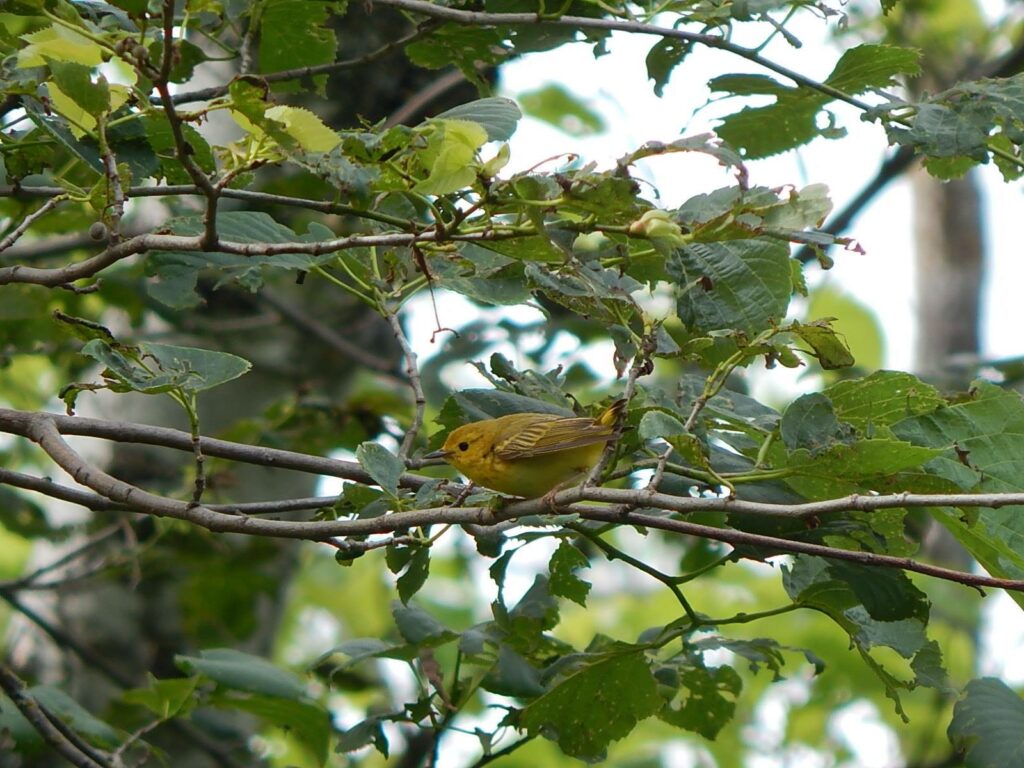 In the fall, migrants like the Northern shrike and numerous species of waterfowl like the surf scoter, Northern pintail, and common goldeneye can be found resting and feeding in our area on their migration from the northern parts of Canada. 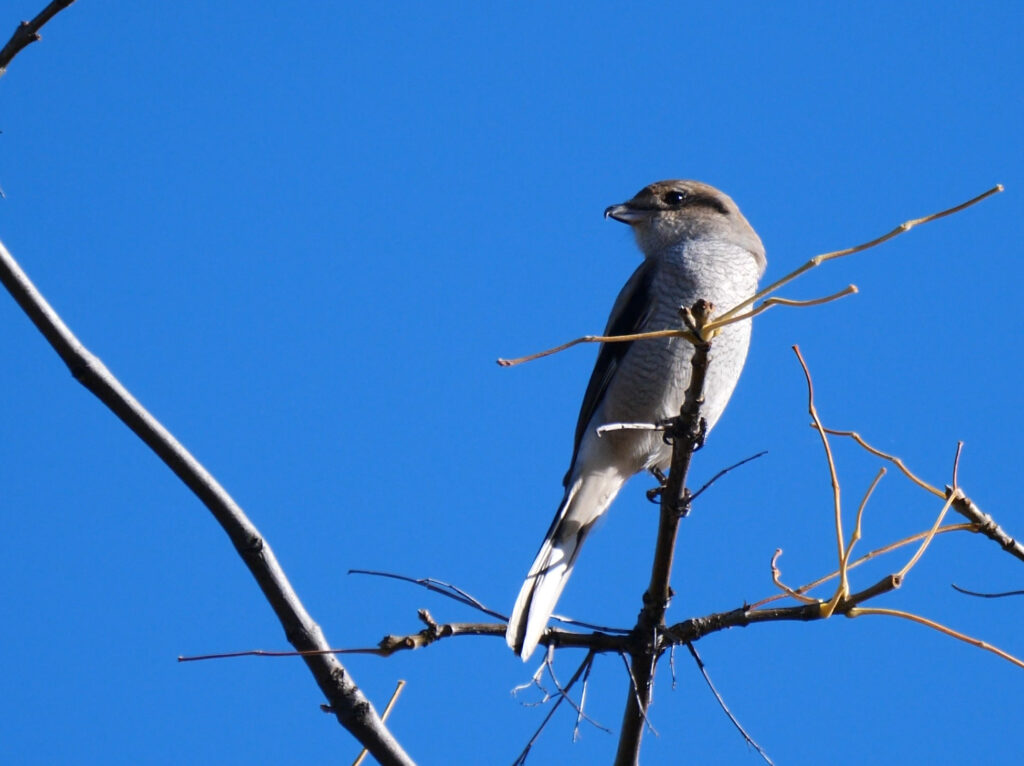 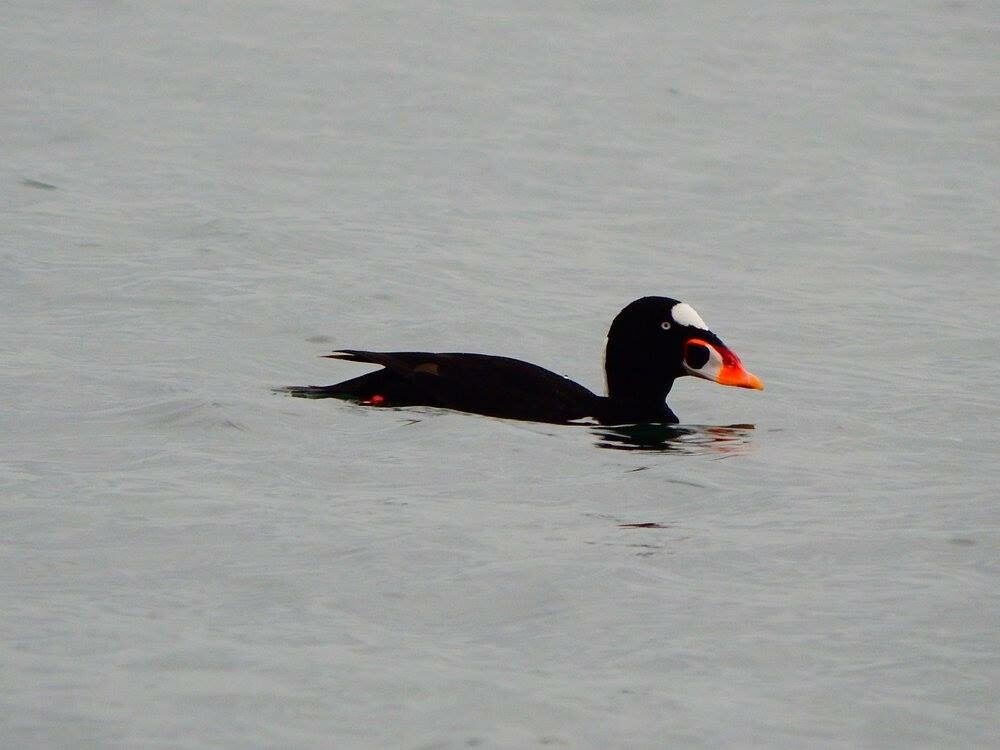 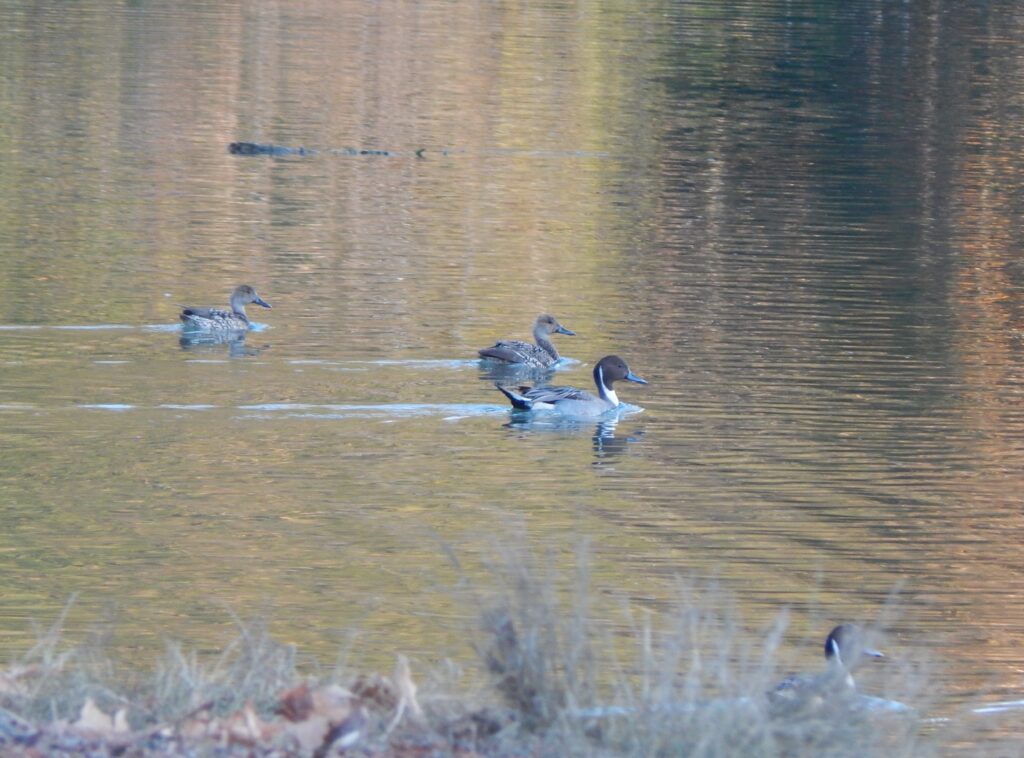 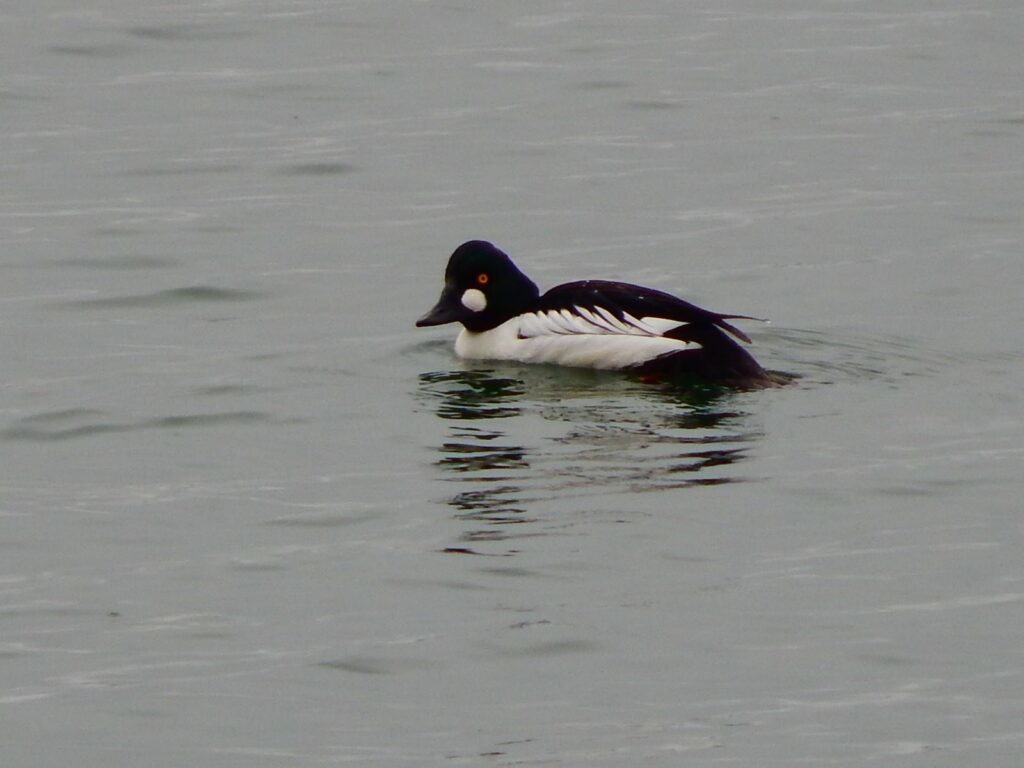 The migration journey places a great deal of stress on animals since it takes so much energy to travel. Even once the birds arrive at their destination, there is still competition for resources like food and shelter, making each patch of habitat critical to their survival.

As you probably noticed, not all animals retreat to dens and nests to hibernate or migrate to warmer climates in the winter.

A common sight in the Pacific Northwest year-round are black-tailed deer. Black-tailed deer have developed the ability to grow a thick winter coat. Their coat consists of thick, long hairs called guard hairs that protect the short, thick, and often wavy hairs of the undercoat, providing exceptional insulation. They even have oil glands near each hair canal that waterproofs their fur! 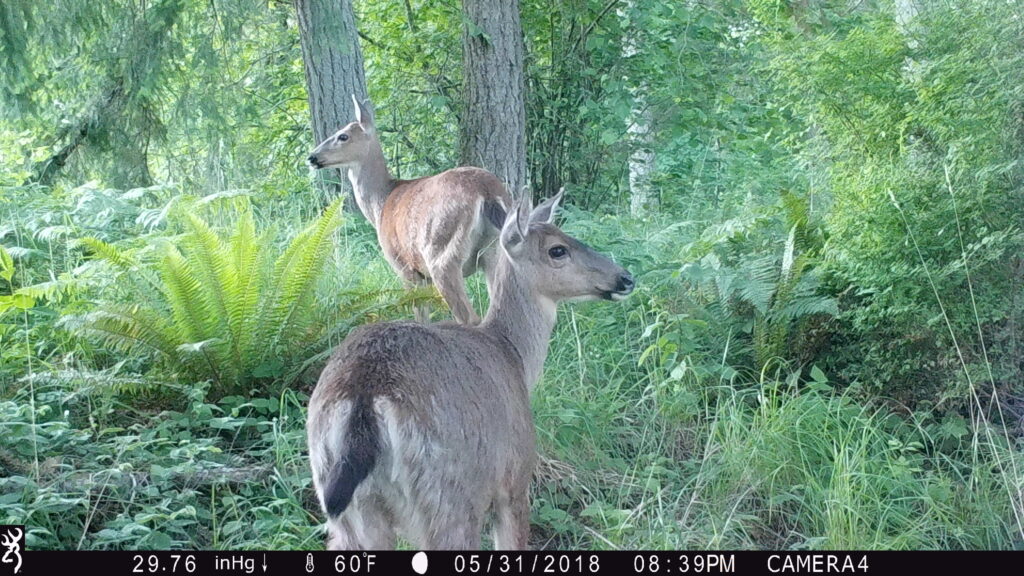 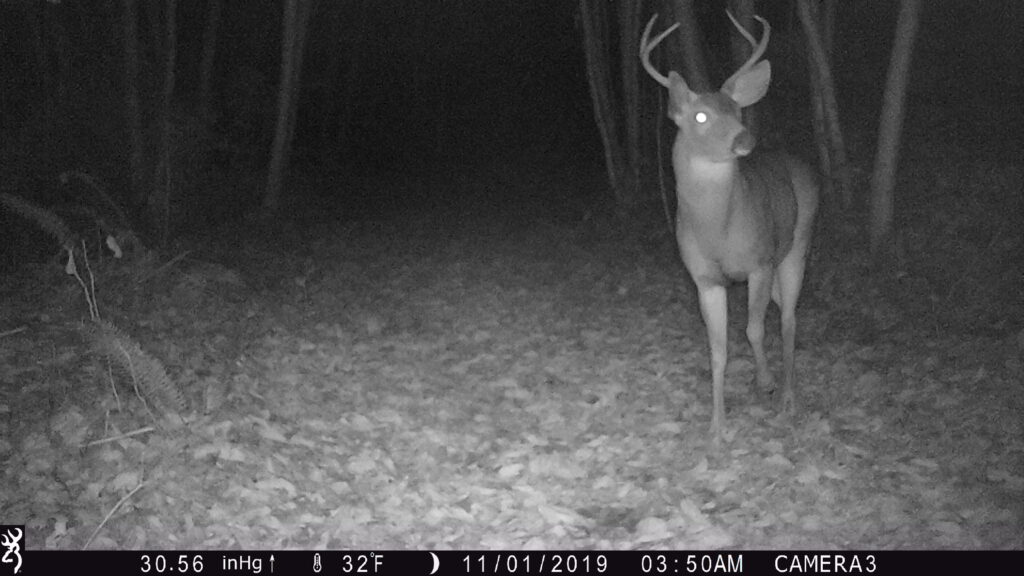 Birds that don’t migrate build up a fat layer and grow a thick layer of down feathers, like the black-capped chickadee, a year-round resident in the Pacific Northwest. You might be familiar with their sweet 2-3 note song, “Hey, sweetie.” 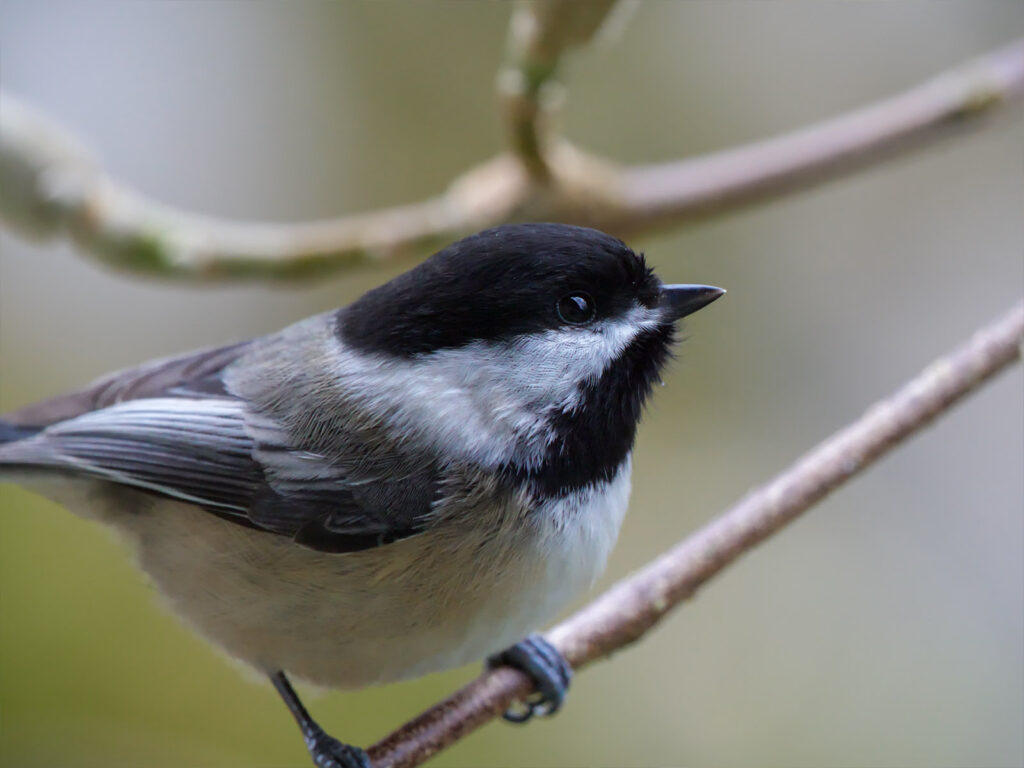 Black-capped chickadees can survive in even colder regions such as Alaska, Canada, and Minnesota. How does a tiny bird survive against starvation and stinging cold?

As temperatures drop, chickadees develop a generous layer of fluff containing 25 to 30 percent more feathers than their summer coat. This extra half-inch thick layer of feathers keeps them up to 100 degrees warmer than the ambient temperature.

Have you ever noticed birds look a little bigger in the winter? Like many birds, chickadees can tense their muscles to raise their feathers and trap an insulating layer of air near their bodies. They look about as bulky as we would with five coats on! 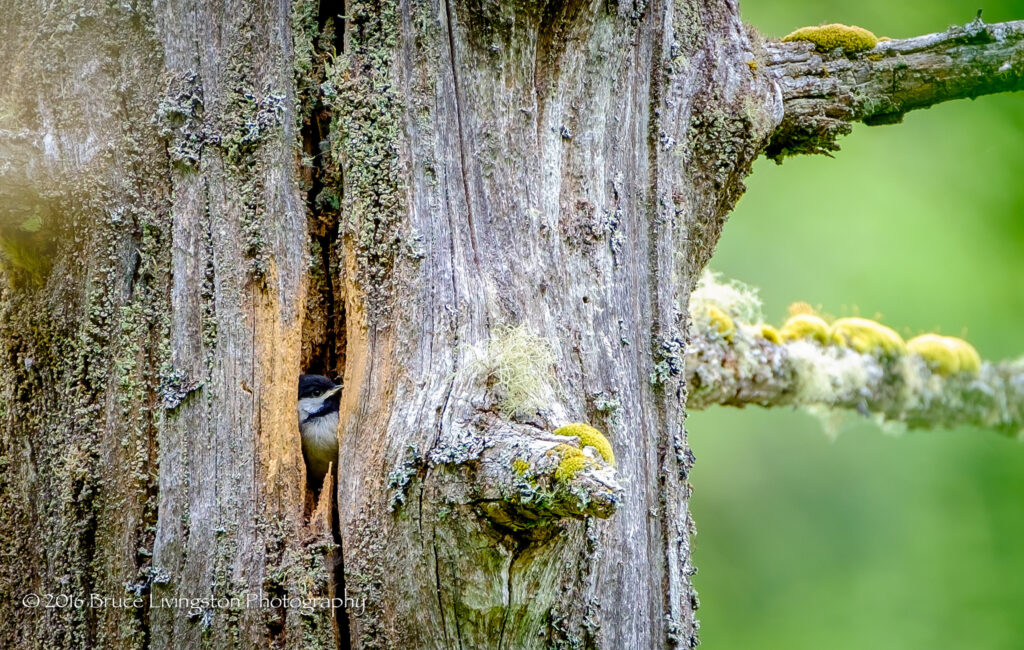 Next time you’re outside, look around and see what adaptations you notice. What is that gray squirrel in your yard doing to prepare and survive winter? Even take a look at the plant life. How does that Doug-fir tree near work or school keep its needles all winter long?