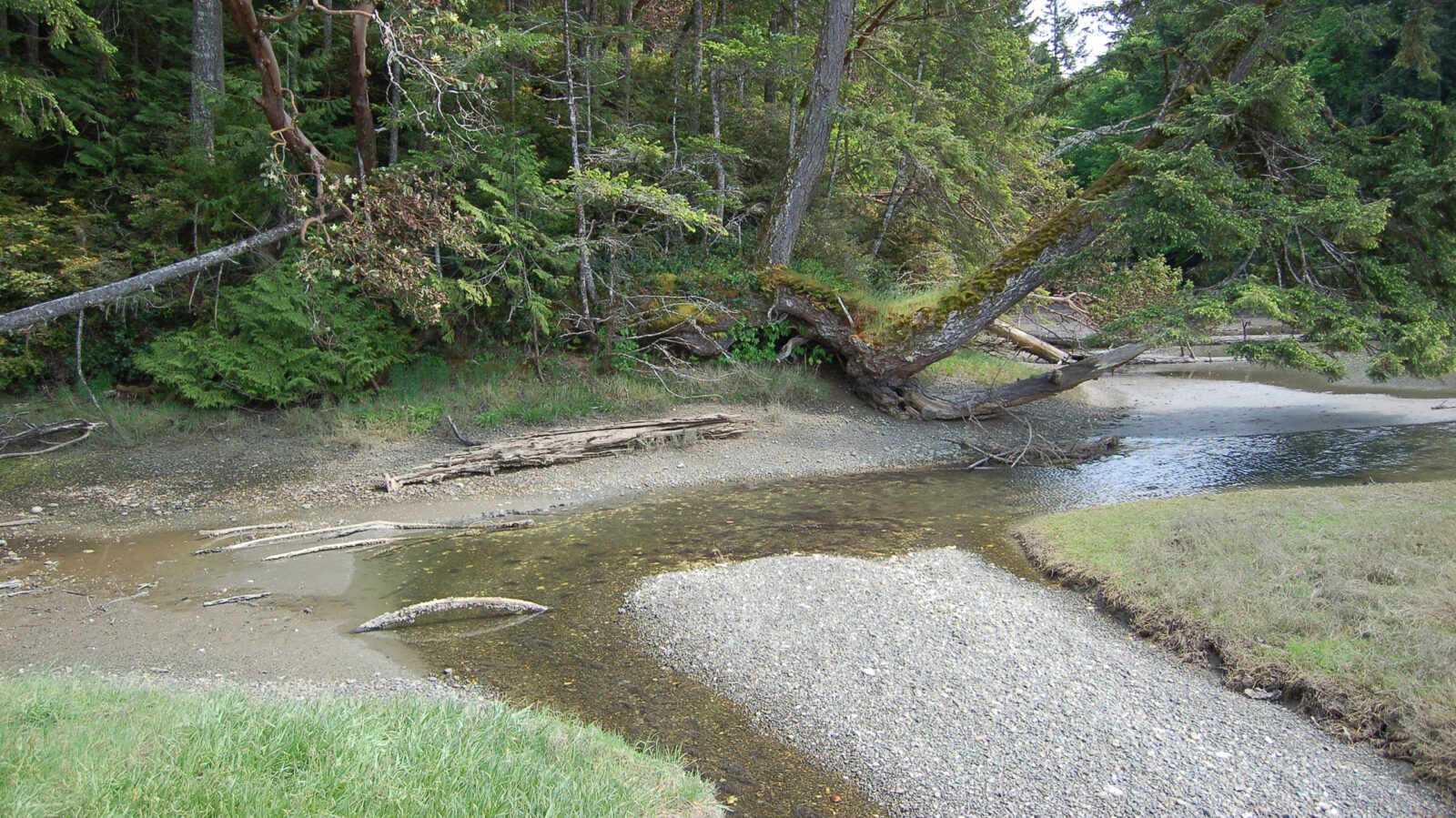 In early June 2011, Capitol Land Trust acquired a 35-acre property on the northeastern shore of Totten Inlet on the Steamboat Island Peninsula. The site has a small pocket estuary with critical salmon habitat, 1,400 feet of waterfront, steep bluffs that replenish natural gravel beaches, and small streams flowing from mature forests that cover most of the property.

Major grants from US Fish & Wildlife/WA Dept. of Ecology’s Coastal Wetlands Grant program and the state’s Salmon Recovery Funding Board helped finance the project. Other funds came from Taylor Shellfish, the Squaxin Island Tribe and the Steamboat Conservation Partnership.

“This is a relatively small piece of shoreline, but it has enormous biological value that will now be preserved and enhanced,” said Capitol Land Trust’s conservation projects manager Laurence Reeves.

According to Laurence, the project was originally championed by local resident and south Sound conservationist Gayle Broadbent-Ferris who died in an accident in 2009. She introduced the property to the Trust and helped keep interest in its preservation alive during a period when development was contemplated. “Gayle, more than anyone, would have been thrilled to know the property is now under conservancy,” Laurence said.

Dave and Joanne Schuett-Hames, local residents who provided marine habitat expertise for the project, also mentioned Broadbent-Ferris’s dedication to conservancy of the Adams Cove area. “She lived near the property,” Dave said, “and felt it was not suitable for intensive development. She had great appreciation for the natural values of the wetlands and the estuary.”

“This was a very complex project,” said Laurence, “but eventually, through a lot of hard work on the part of many organizations and individuals, it all came together. We have skilled and dedicated staff, but we can’t do it all. As with many of our projects, we relied on contributions of time and expertise from many members and volunteers. Their involvement was absolutely critical.”

Near the start of the project, Laurence visited the site with Dave and Joanne to assess its potential. What they found was a pocket estuary in relatively pristine condition, with many acres of neighboring forest and wetlands that provide clean fresh water. The property, known locally as Adams Cove, includes a protective sand spit at the estuary entrance, a beach used by spawning forage fish, an intertidal salt marsh, and mudflats providing habitat for Puget Sound coho, winter steelhead, chinook, summer chum, and coastal sea-run cutthroat.

“This is a pretty special piece of the south Puget Sound ecosystem,” said Dave. “Our job was to capture the nature of the place in language that biologists would understand, to provide heft for the technical and scientific aspects of the grant applications. We helped explain why this particular place, in its current state, is so beneficial to fish and other marine populations.”

Dave and Joanne do this kind of work professionally, but they did it as volunteers for this project. They have helped Capitol Land Trust with several other projects as well.

The threat of commercial development above the shoreline bluffs accentuated the sense that the property should be conserved in its entirety. According to Dave, “The upland area is a forested wetland system that provides habitat for birds and plants, and is the main source of cool, clean fresh water for the estuary. Anything built on the bluffs would more than likely degrade water quality and the entire system’s ability to sustain plant and animal life.”

The estuary is also the mixing zone for fresh and salt water, and it’s especially important for the very large native chum run that spawns each year in Kennedy Creek at the southern end of Totten Inlet.

According to Dave, “The fry come out of the freshwater creek in the spring as very small fish, only a couple inches long. The open water of Totten Inlet can be dangerous for them. The salinity presents a huge physiological adjustment, and it helps to have places like Adams Cove where they can find relatively fresh water to reduce that shock. The estuary, with its protective spit, shallow water, and overhanging trees, is a refuge from wave action and from predatory birds and fish. It’s also a source of small organisms for them to eat.”

There is also evidence that young Chinook salmon from central and even northern Puget Sound forage in Totten Inlet and its estuaries before migrating out to the ocean.

One other important feature of the Adams Cove habitat, Dave said, is its undeveloped shoreline, with intact forest. “You have well-developed shoreline vegetation to feed the nutrient food chain,” he said. “Some of the trees will fall into the estuary, providing good cover habitat in the water. And trees hanging over the water provide shade and help keep the water cool.”

The other benefit of conserving this piece of land is the preservation of natural “feeder” bluffs, which help maintain the viability of beaches that are the spawning ground for sand lance, pacific anchovy, herring, and other “forage” fish on which salmon feed.

According to Dave, “When this kind of shoreline becomes highly developed, people often build bulkheads because they don’t want the erosion. Eventually, over time, as that erosion is eliminated or controlled, the gravel can get scoured out, leaving nothing but clay. It’s important to have unarmored bluffs with some erosion to provide gravel and sediment to replenish the beaches.”

The Totten Inlet coastal shoreline is a permanent or migratory home to more than 100 bird species, including eagles, owls, ospreys, plovers, sandpipers, woodpeckers and loons, and the property has potential as a possible restoration area for the native Olympia oyster, Laurence said.

Both Laurence and Dave emphasized that Adams Cove is a particularly unspoiled pocket estuary. Many similar estuaries, especially those with spits, have been dammed up in the past to create freshwater ponds.

Dave stressed that each pocket estuary is part of a larger ecosystem that is important to newly hatched fish. “They don’t just function in isolation,” he said. “You get more benefit if there are a series of them along the shoreline that the fish can move into. Maintaining a network of them would be much better than just preserving one.”

The main purpose of this project was to conserve the estuarine habitat. A corollary to that is recognition that human visits to the property, especially on land, are not necessarily beneficial to that purpose. “As with many of our projects,” Laurence said, “we encourage thoughtful and respectful visitation for educational and scientific purposes. We want people to remember that hands-off is probably the best policy. Our five-year management plan for Adams Cove is to just let it do its own thing. And that’s in keeping with the intent of the funding agencies.”