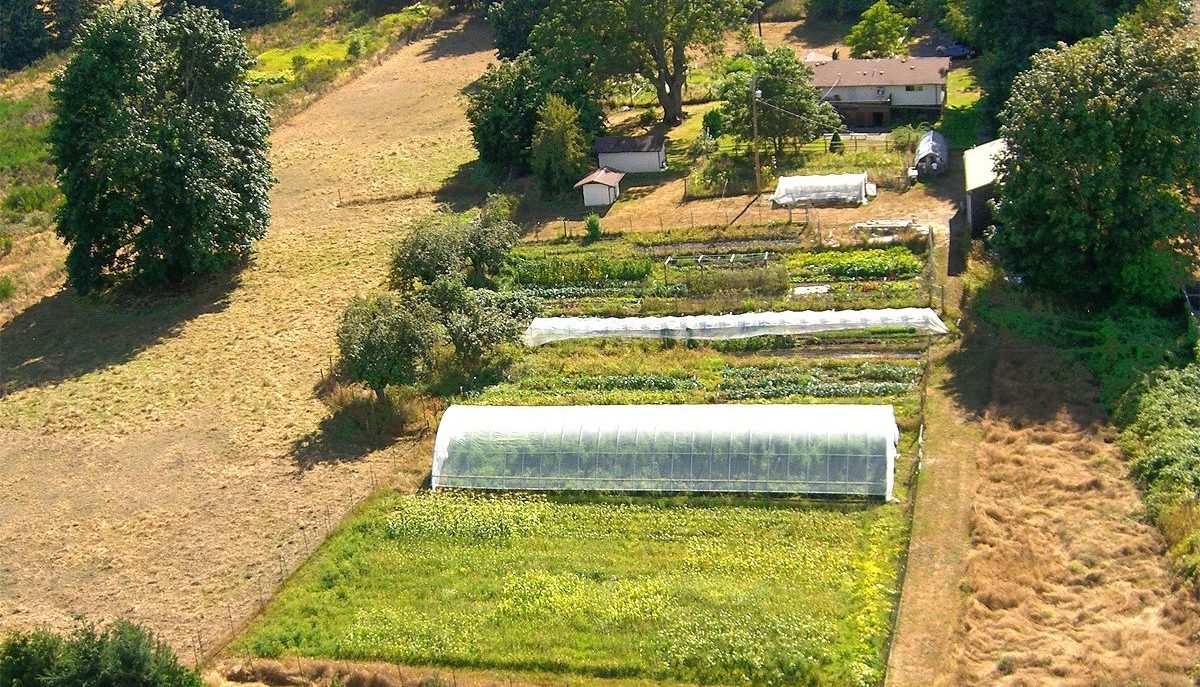 “We are so grateful to the Capitol Land Trust and the Natural Resources Conservation Service for their work with us, in achieving the goal of preserving soil for future generations. ” – Mark and Kathleen Clark.

Ten to fifteen thousand years ago, retreating glaciers formed an expanse of prairie and oak savannahs across the southern Puget Sound Region. Today only two percent of southern Puget Sound’s prairies and oak woodlands remain. Prairie plants and flowers sustained Native Americans for centuries. Home to many unique plants and animals, native prairies are among the most endangered habitats in North America, which makes saving each acre critical.

Today, the Clarks grow vegetables and flowers as a Community Supported Agriculture farm. But, in 1845 it was homesteaded by early pioneers George and Isabella Bush, who established the first permanent settlement in what would become Washington State (New Market, now, Tumwater).

The Bushes joined others in a wagon train from Missouri to Oregon in 1844. The party came north to Tumwater in 1845 on the Oregon Trail. George witnessed the growth and prosperity of the area; however, he was unable to claim title to his land because he was black. Finally, in 1855, in one of its first acts of business, the Washington Territorial Legislature passed a resolution requesting that the United States Congress grant George and Isabella the land they had settled and farmed. The resolution passed giving them title to a total of 668 acres, including much of the land the Olympia Airport, founded circa 1910 as Bush Field, is located on. From the Bush Prairie Farm website: www.bushprairiefarm.com/bush-farm-history.html

Bush Prairie Farm was used for agriculture and played an important role in the early history of the area. Bush was an expert farmer and his generosity, especially to new settlers, is legendary. Bush brought several trees with him from Missouri, one of which is the Butternut Tree that still stands on the property today—171 years later. DNA testing shows this tree as the oldest living butternut in America, maybe in the world.

The Clarks are dedicated to keeping the farm in the community. They are excited about the cultural learning opportunities and to provide healthy, local food to our community through their CSA.

“The Clarks respect the history of their property and the importance of its rare prairie habitat and soils. They were committed to protecting this last remnant of a once-vast, historical farm, with its 171-year-old Butternut tree. Because of them, the land will continue to bear food and remind us about an important piece of our history. I’d also like to thank our partners, the USDA’s Natural Resources Conservation Service.” said Amanda Reed, Capitol Land Trust’s Executive Director.

The primary purpose of the conservation easement is to protect agricultural land and was completed in partnership with the Natural Resources Conservation Service. Funding to complete the conservation easement process and to ensure long-term stewardship of the land was provided by the Clarks, the Natural Resources Conservation Service, Capitol Land Trust members and private individuals. Thank you to Bean, Gentry, Wheeler & Peternell, PLLC and Mark Peternell, who represented Capitol Land Trust on the project and provided the work pro bono!