Capitol Land Trust (CLT) has announced the expansion of its Blooms Preserve near Littlerock. The non-profit land conservation organization acquired 60 acres of the preserve in 2018 and has recently purchased an additional 82 acres.

“After CLT acquired the first 60 acres it became apparent that acquiring the adjacent wetlands and even more of Blooms Ditch would enhance conservation and restoration efforts,” said CLT’s Land Protection Manager, Thom Woodruff. “With the continued cooperation of a willing landowner, the second phase was completed. This could not have happened without the financial contributions made by the Washington State Salmon Recovery Funding Board and Thurston County Conservation Futures. Big gratitude to them and the cooperative landowner.”

Water and wetlands are a central feature of the preserve. Blooms Preserve lies in the eastern section of the Black River watershed and includes 4,300 feet of Blooms Ditch and its feeders. Blooms Ditch was likely created over 100 years ago to enhance agricultural practices. Today, it overflows its banks regularly during the winter rainy season into adjoining wetlands and fields. CLT volunteers have been monitoring water levels of Blooms Ditch over the last year and have found there is good correlation to Salmon Creek just to the north. This was a welcome discovery because it allows the team to use data from Salmon Creek collected by Thurston County Emergency Management since 2010 and estimate what the water levels have been in Blooms Ditch for the last 10 years. 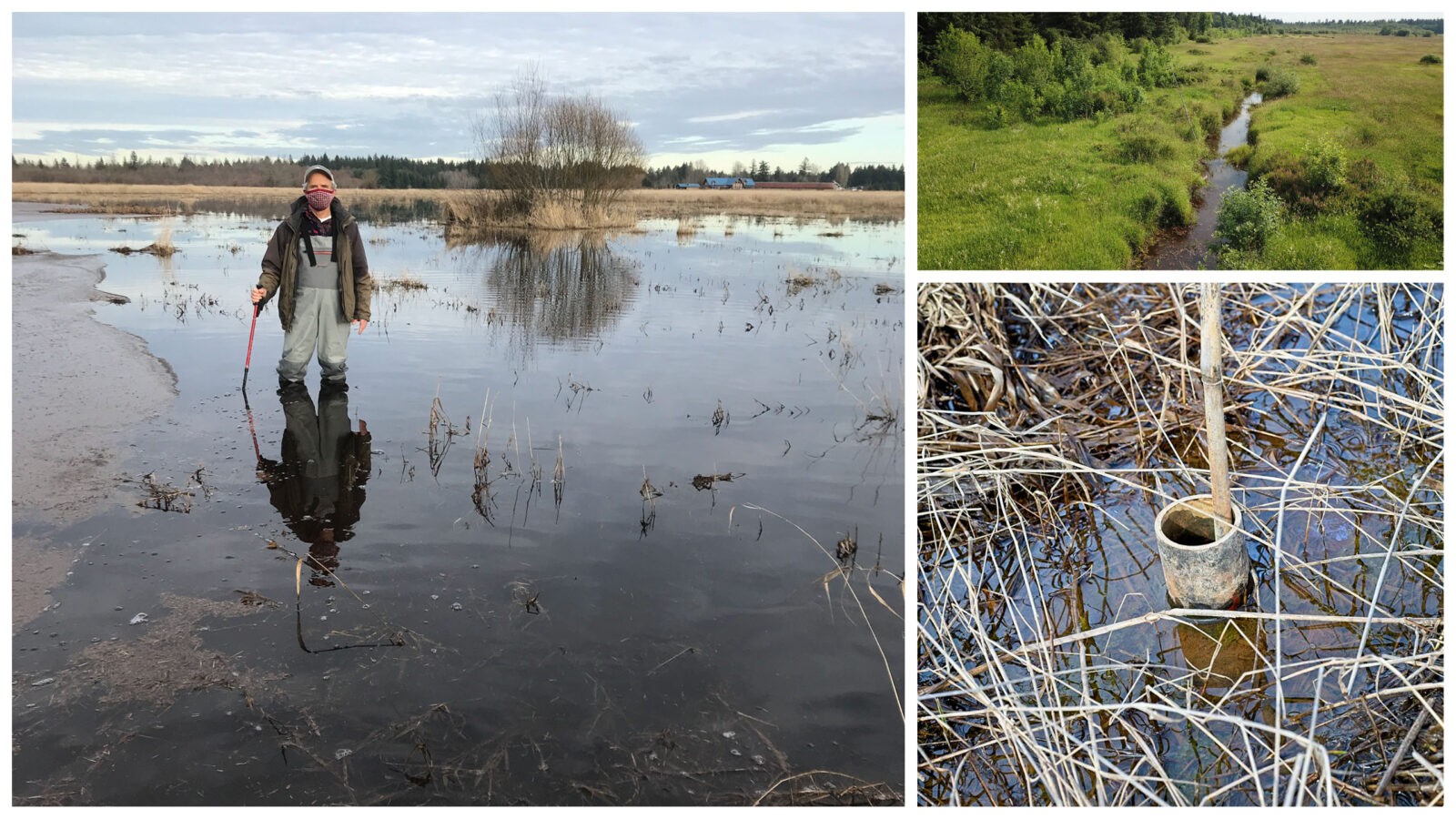 These historical water levels will be useful in the design of a habitat enhancement project CLT will undertake at the preserve in the coming years. The project is designed with the needs and preferences of the federally threatened and state endangered Oregon spotted frog in mind. A key component of the project will be creating a series of shallow ponds near Blooms Ditch. Year-round water is critical for Oregon spotted frogs because they live their entire lives in water without going onto land. The water level data from Salmon Creek and soil profiles where the ponds will be located indicate that the ponds only need to be dug three feet deep to have water year-round.

Soil core samples from the site inform the restoration design and give a glimpse into the history of the land. From left to right, the top layer is clay, followed by peat, sand, and gravel. The 14 cm layer of peat dates back 12,700 years and indicates this area once was covered by a wetland bog. Photos by Ian Stoner.

CLT has also been collaborating with the US Fish & Wildlife Service and Washington Department of Fish & Wildlife (WDFW) on the design of the project. WDFW has been surveying Blooms Preserve and other nearby properties for Oregon spotted frog egg masses to better understand how this fragile species is doing. This year they found that several egg masses laid during a high-water event became stranded on dry ground when the water receded.

Oregon spotted frog egg masses need plenty of still water to thrive. Each female frog lays one mass each year. Once one female has laid eggs, others will come and lay near it, creating some protection and warmth for one another. When the tadpoles hatch, they stay within the egg cluster for a period before venturing out into adjacent waters. Left photo by Bruce Livingston. Right photo by Emily Butler, WDFW.

The Oregon spotted frog is just one part of the complex ecosystem at Blooms Preserve. Blooms Ditch provides rearing habitat for coho and winter steelhead. It’s also the home of three-spine sticklebacks, riffle sculpin, and Olympic mudminnow. The Olympic mudminnow is only found in Washington and favors the preserve’s still waters, mud, and dense aquatic vegetation. The presence of beavers is evident through their dams, sticks peeled of their bark, and even beaver-dug canals. The acres of wetlands and forest also support many species of birds, such as American kestrel, orange-crowned warbler, and green heron. 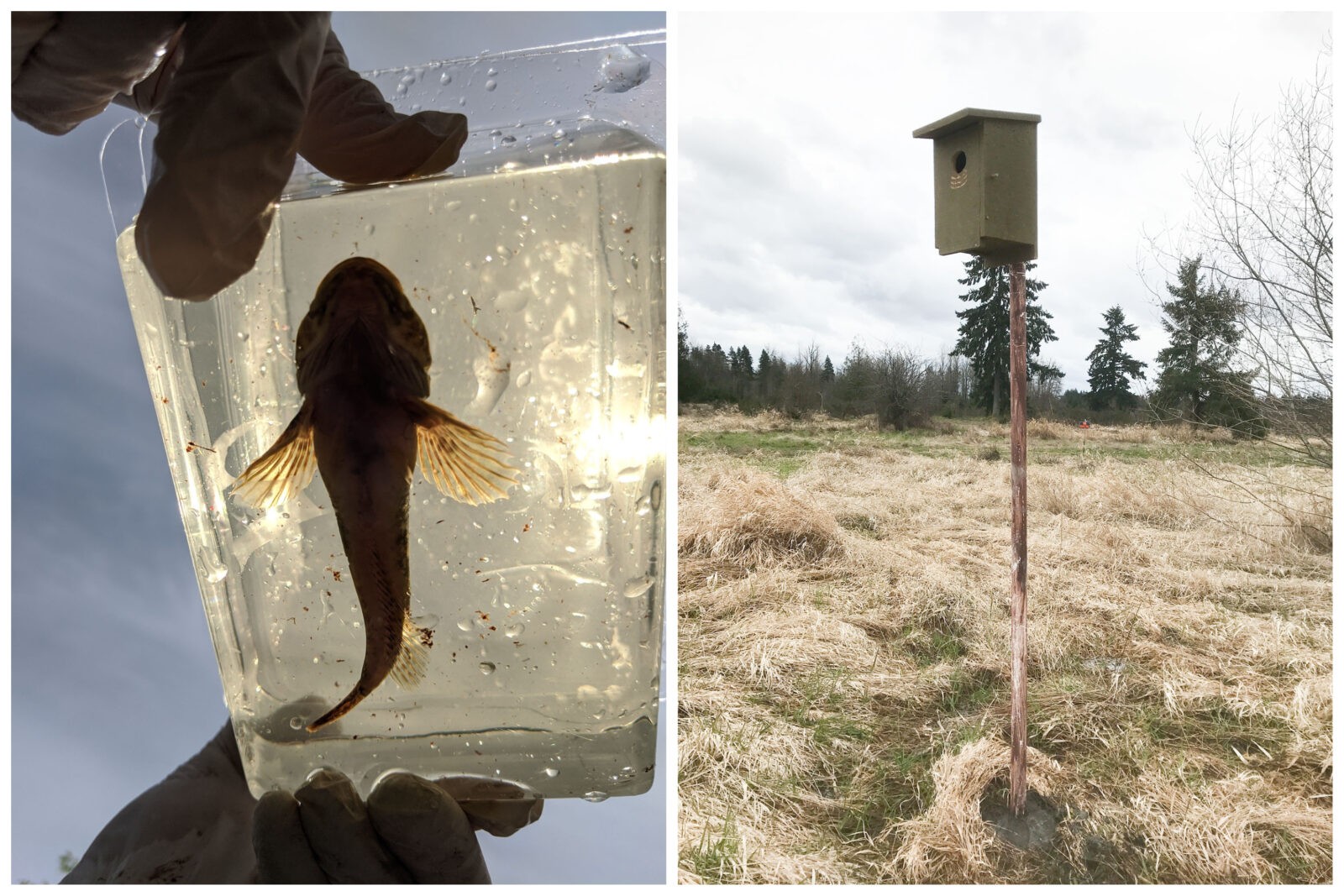 Blooms Preserve is just one example of CLT’s work to conserve and care for ecologically significant lands. The public is invited to join Capitol Land Trust at their Virtual Conservation Breakfast on April 21st to explore conserved lands in the South Puget Sound and Chehalis Basin watersheds, while meeting a variety of community members. To learn more and register, click here.