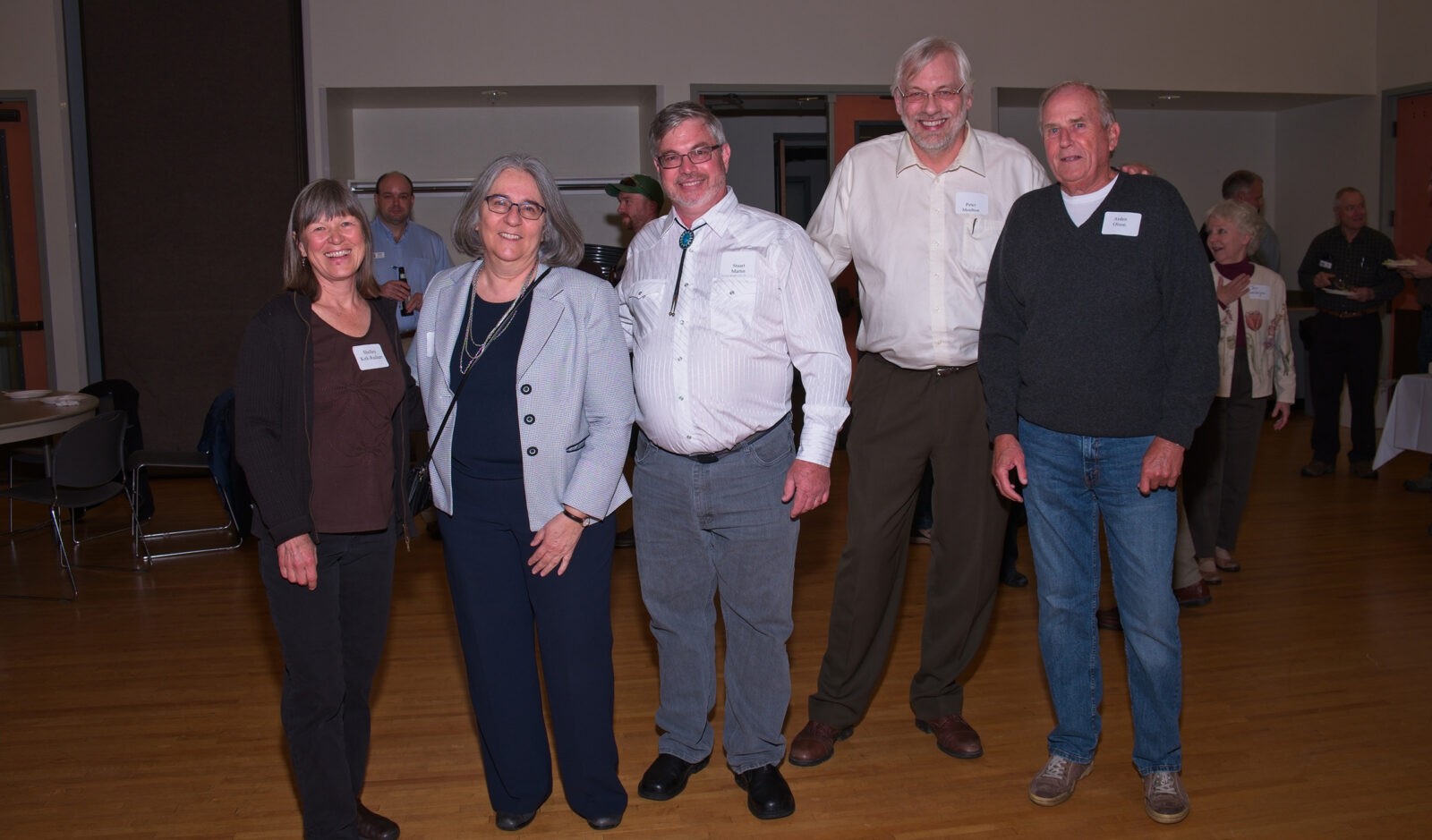 Over 80 members attended this year’s Annual Meeting, including many of the founding and early Board members, for a celebration of our 30th Anniversary.

Founding Board member, Stuart Martin, reflected on the early days – the people who created the land trust and the first projects. He said, “we made some early critical decisions that I think were the right ones… we wanted to have an endowment for every property we protected and we wanted to be a part of the larger land trust community by joining the Land Trust Alliance.”

He recognized our long-time members and landowners, “We couldn’t protect any land without the landowners. They found out about us somehow, and they were ready to make a commitment to protect their property with the generous donation of a conservation easement. I’m talking about Bill Aldridge, who granted us the first conservation easement in 1989; the Davis’s who followed right after in 1990; then Harmony Glover in 1992; and the Edwards and Stewarts in 1994. They all trusted us to help them achieve the worthy goal of permanent protection of valuable wildlife habitat and scenic landscapes.”

Capitol Land Trust began when a group of citizens – concerned about the potential impacts of a subdivision called Hollywoods at the base of Henderson Inlet on Woodland Creek – came together under the guidance of the national organization Trust for Public Land. The group met throughout the summer of 1987 and the land trust had its first formal meeting in November of 1987.

They started working on the organization’s first two conservation projects.

The land trust negotiated an agreement between the land developer and local conservation organizations over the Hollywoods subdivision. The result was 72 acres of protected saltwater wetlands and riparian area at the confluence of Woodland Creek, owned by Thurston County. This formative transaction established our culture of collaboration.

Steve Wells, Board member from 1992 to 2004, added that the time was right for private land conservation in the 90’s. The recent critical areas ordinance had created uncertainty about how the regulatory environment would impact land values. Private land conservation became a solution for landowners seeking to protect their land, while recognizing its ecological and financial value.

Ken Guza, Board member from 2000 to 2007, talked about a critical juncture for the organization. Faced with growing responsibility for the lands we promised to protect in perpetuity, the organization had to decide whether to stagnate or to grow. Luckily, they decided to grow, hired our first Executive Director, Eric Erler, and continued to protect essential natural areas and working lands.

Pene Speaks, the longest-standing Board member (1997 to 2012) and longtime President of the organization, added that around the time she joined the Board, the organization embarked on its first strategic conservation plan to identify the most critical habitats in need of protection. The new plan guided the work of the organization to ensure the most valuable investments of limited resources.

Today, Capitol Land Trust is a strong organization because of the leaders and members that have dedicated their time, effort, and financial contributions over the last 30 years. In 2013, we were accredited by the national Land Trust Accreditation Commission, in recognition of meeting the highest standards and practices for land trusts. We are now following the goals in our 2020 Strategic Plan, continuing our legacy of connecting people and conserving land.

Thank you for all you have done for Capitol Land Trust and for your ongoing support!