Living in the Pacific Northwest means that we are close to saltwater, charismatic stand-alone mountains, and forests. These landscape features lend themselves to create unique weather patterns and other notable events that we can see every year. Here are three of the most noticeable late-summer happenings.

Have you ever seen the waters of the ocean or the Puget Sound glow during a dark summer night? When conditions are right, a type of bioluminescent phytoplankton blooms and causes waves or other water disturbances to glow a bright blue. These phytoplankton thrive in the nutrient-rich waters of the west coast. When the phytoplankton have enough energy and are in present in large quantities, their glow is visible to the naked eye.

The conditions behind the blooms are not well understood, but their occurrence can still be predicted. When shorelines are warm (most often in late summer), it’s possible to view the glow in a number of places in oceans, bays, and the sound. Best viewing conditions occur near high tide on dark shorelines in places where the water is relatively still.

There are times in late summer when we have cloudless days… except for one. Across a stretch of blue sky, a peculiar cloud hovers over the top of Mt. Rainier. It can look like a disc, or a funnel, or a pyramid, but it clearly has a relationship with the mountain. This type of cloud is a useful indicator for the weather ahead, and is called a lenticular cloud. 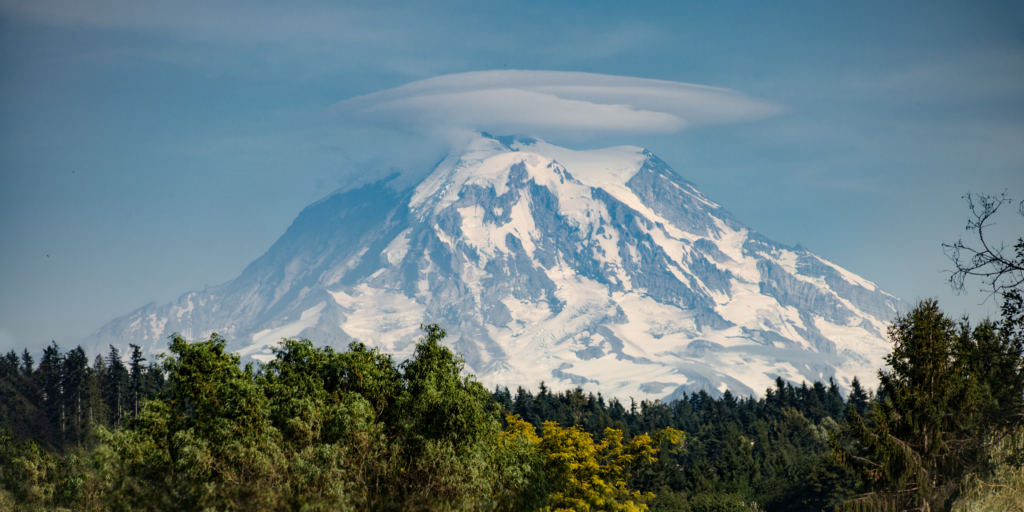 Mt. Rainier and a Lenticular Cloud, by Bernd Thaller

Lenticular clouds form when moderately moist air rises up and over a peak. Around Mt. Rainier, air can rise from all sides of the mountain and condense into a lens-shaped cloud above it. When the air is moved by wind, the movement of air pushed over the peak mimics a wave. Imagine the mountain as a bump in the air’s road. The air rises on one side and then descends on the opposite side of the peak. If the temperature at the top is cool enough, moisture-filled air in otherwise cloudless sky rises and condenses into a cloud, and then sinks again.

If you’re near the lenticular clouds, it can indicate that rain may be in the forecast. These clouds often appear in late summer or early fall, because they provide a visual cue that moisture is moving into the area after a dry period. Depending on how far away you are, these clouds can be an early warning sign of coming rain.

Why do we often see hazy skies in the summer? Haze is typically thought of as a diffuse layer of something in the atmosphere which restricts visibility. The answer is pretty straightforward. Haze is the visual result of air pollution, and it is more noticeable during the summer.

Due to the recent increase in wildfires, we’ve come to expect smoky skies at some point every summer. Smoke and combustion particulates from fires deflect light and create a hazy or smoky look in the sky. When smoke, dust, or combustion particulates are suspended in the air, that is considered to be a “dry haze”. But haze doesn’t have to be connected to a forest fire. A major cause of haze is human-emitted air pollution. 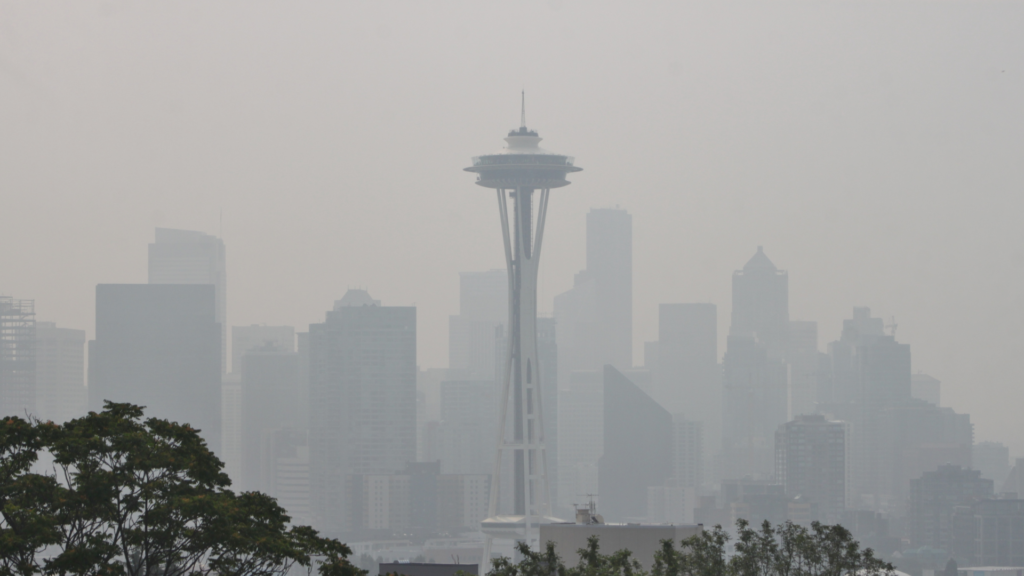 Human-induced haze is worse in the summer because sunlight and humid air favor the creation of chemically stable forms of pollution, called “wet haze”. Chemicals from manufacturing, combustion, or other sources form tiny droplets surrounded by water in the atmosphere. Sulfur dioxide, a common air pollutant, is an example of a chemical that does undergoes this process. In droplet form, the pollutants become stable in the atmosphere. These droplets stay in the air for days, deflecting light and creating hazy look in the sky.

Haze is also more prevalent during the summer because it is more visible. Light-deflecting pollution is more visible in the sky because there are fewer clouds to hide it, and less rain to pull it out of the atmosphere.

It’s worth noting that the atmosphere on any given day can contain a mix of smoke, fog, pollution, and more. Haze may be part of the picture, but not the only thing impairing visibility. The term “smog” often refers to the often refers to human-induced pollution, or the whole atmospheric soup of visibility-impairing pollution. Interestingly, blue light is preferentially deflected in haze because it has a shorter wavelength. The reduction of blue light is why sunlight appears more red through haze or smoke.

When you see bioluminescence, lenticular clouds, or haze in late summer or fall, remember that they are the effects of large climate processes at work.