Did you know that Capitol Land Trust (CLT) has 90 cavity boxes spread across nine of our preserves? Cavity boxes range from large wood duck, northern flicker, and barn owl boxes to smaller purple martin and bluebird/swallow boxes. Each type of box is placed in habitat that matches the birds’ needs to attract nesting pairs. And each year, their human caretakers clean out all the nest boxes, identify what species used them and whether nesting was successful. This is the story about the barn owl cavity box at the 133-acre Twin Rivers Ranch Preserve at the head of Oakland Bay in Mason County.

Over the years we have had reports of barn owls utilizing the barn at Twin Rivers Ranch Preserve for roosting. In 2019, CLT volunteers built and placed a barn owl cavity box in the barn at the preserve, hopeful that an owl pair might move in and raise a family. 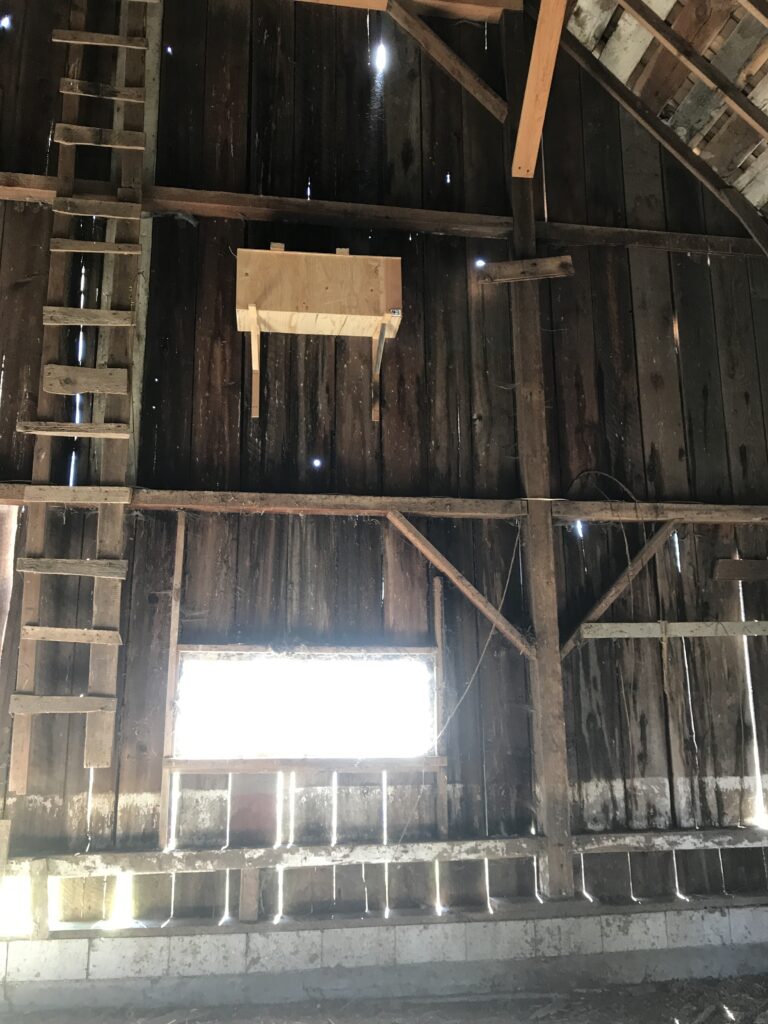 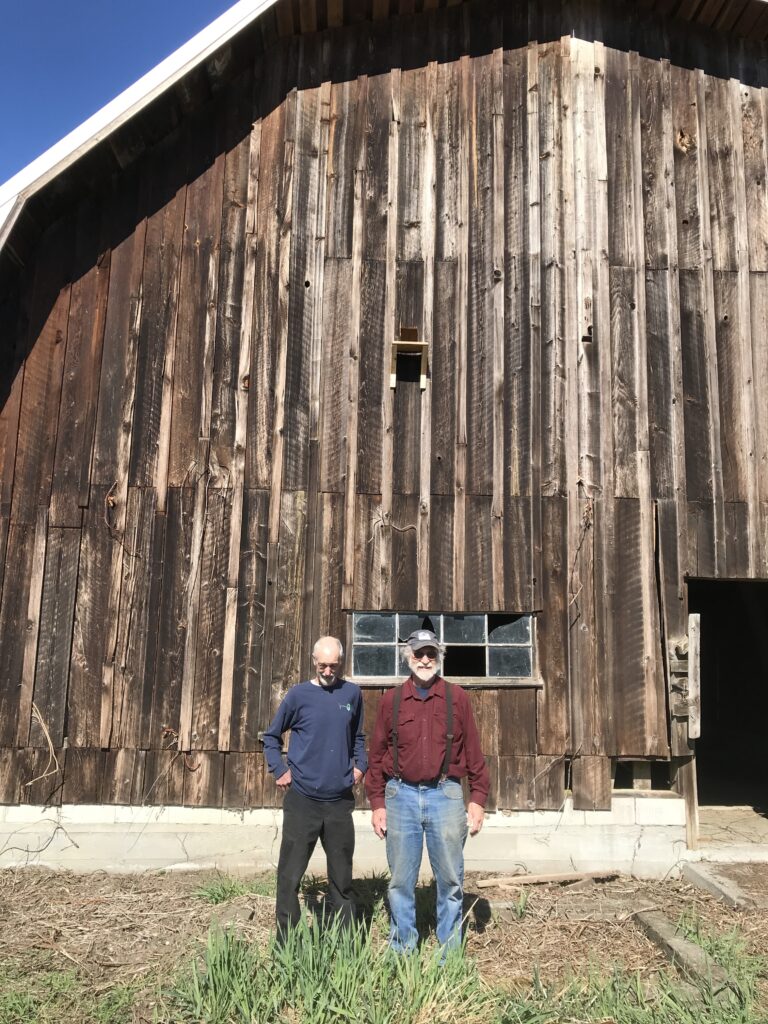 During and after the 2020 nesting season, evidence showed us the box had indeed been utilized by barn owls and their chicks. We were curious to learn more about them during the 2021 nesting season and placed a wildlife camera outside of the box. 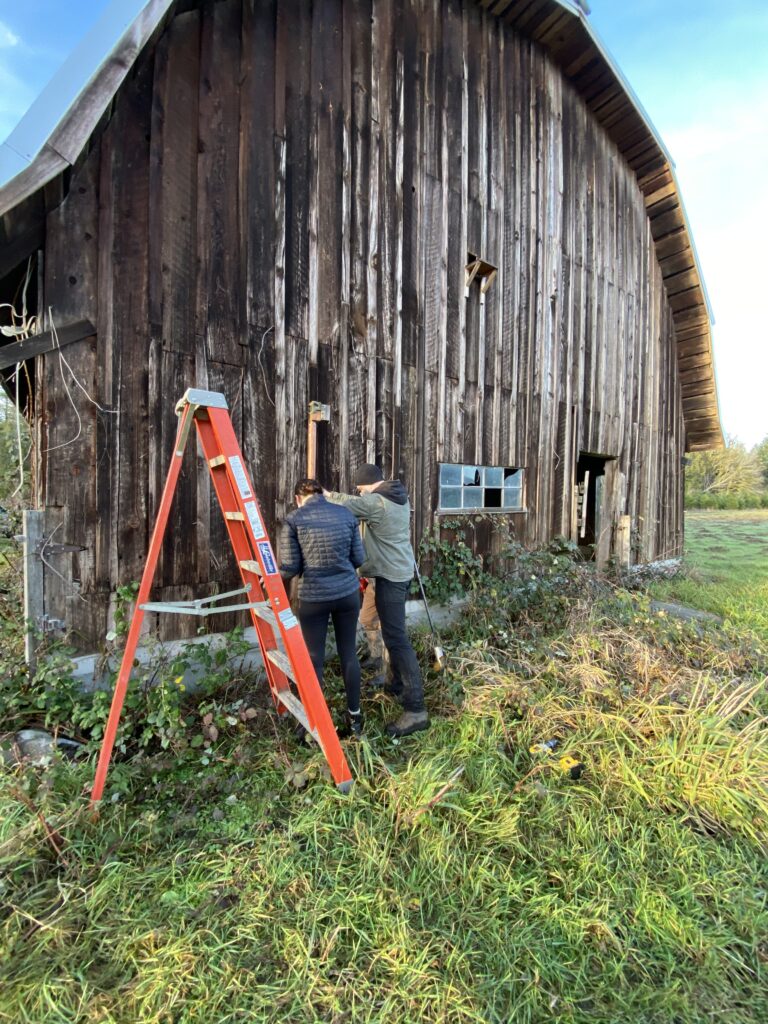 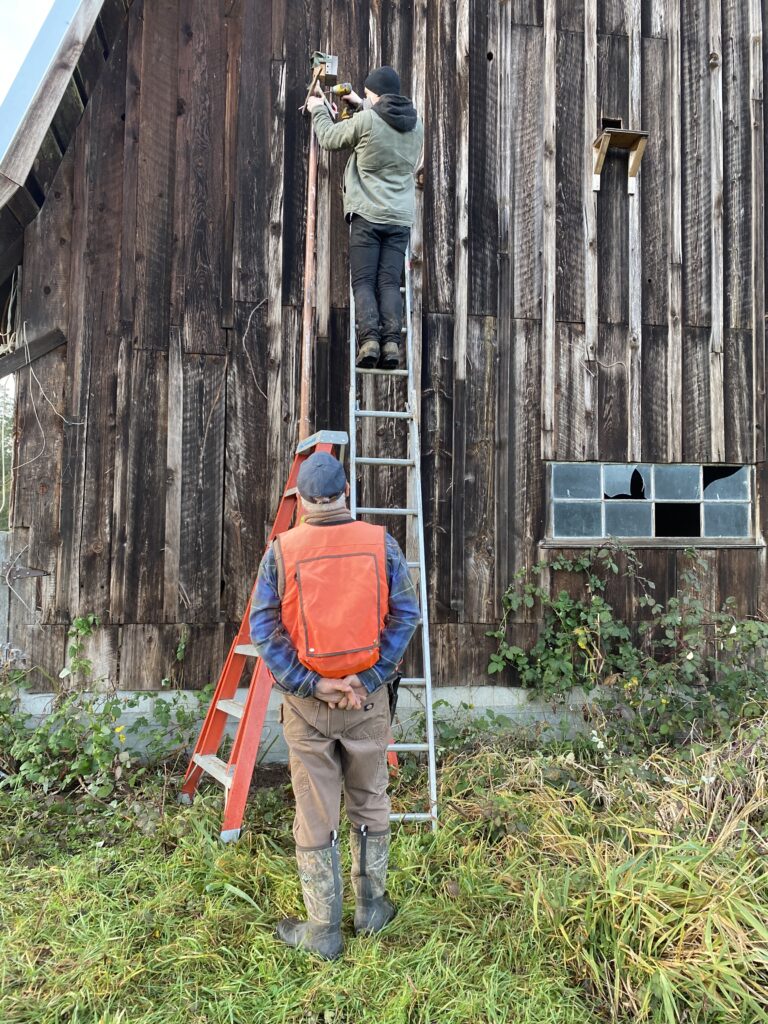 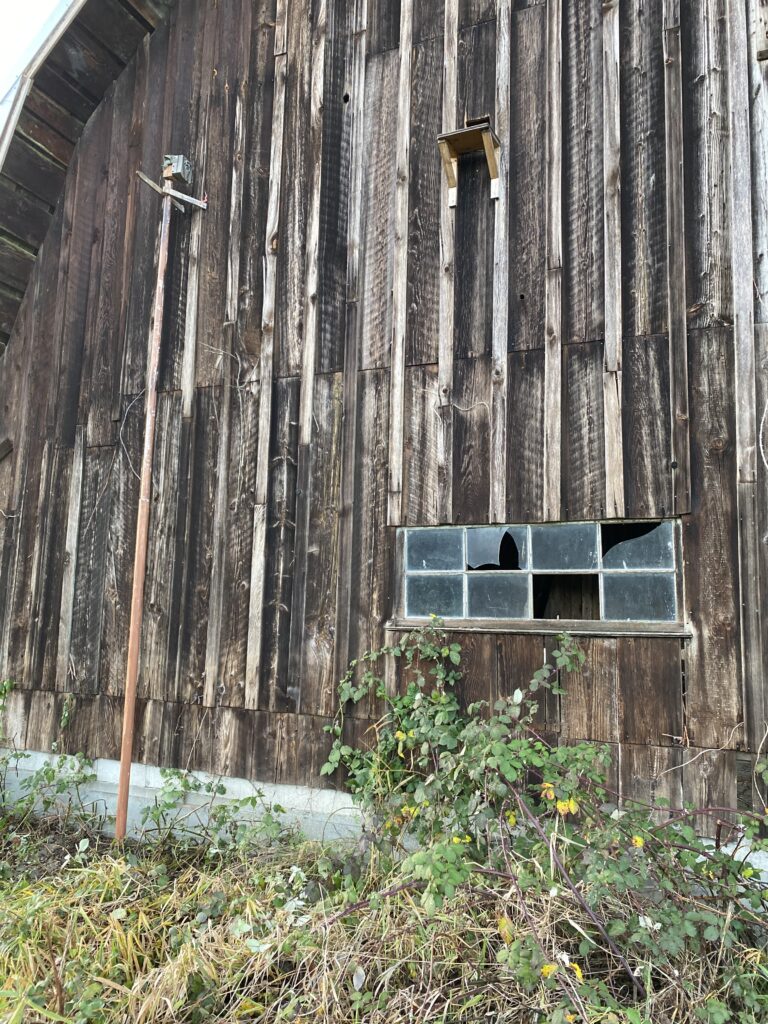 To our delight, barn owls once again nested in the cavity box during the spring of 2021! The wildlife camera picked up photos and videos of the owl over a period of five months. Perhaps the most exciting thing captured on camera was the nightly activities of three owlets. The owlets would appear at the nest box opening and test out all kinds of behaviors on the outer platform like wing strengthening, head bobbing, and snatching food from the adults. We think at least three owlets successfully left the nest around May 2021. Let’s find out a bit more about these beautiful birds and their life story. 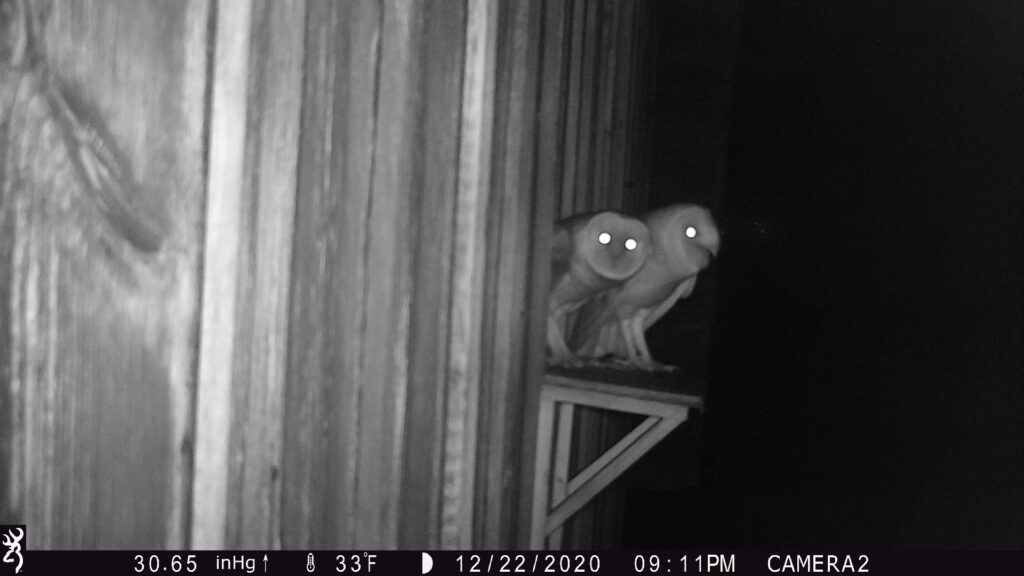 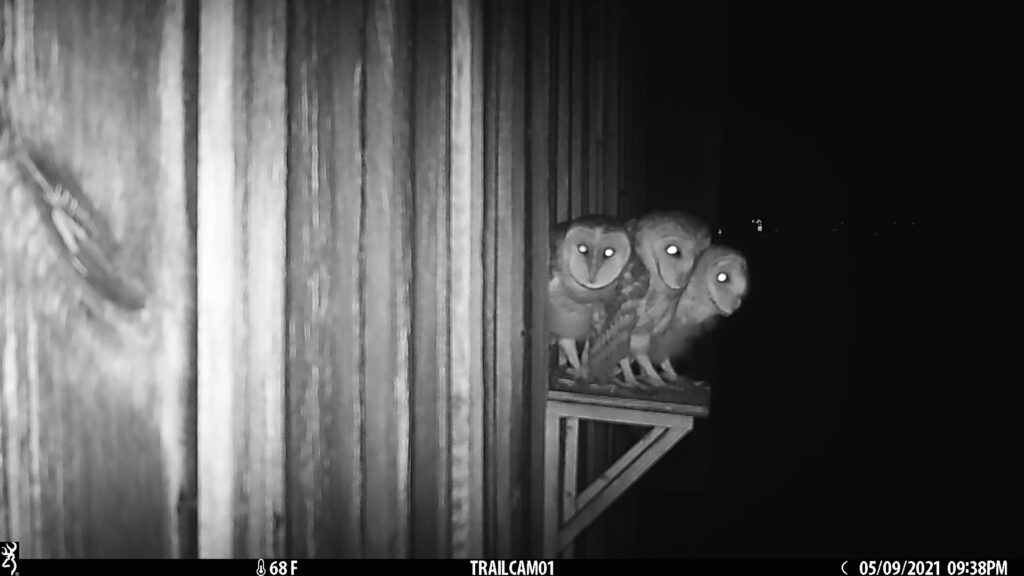 The Life of a Barn Owl

Barn owls are remarkable owls and can be found around the world. Because they are primarily nocturnal, you may never have seen one. They tend to fly low and across open fields at night, which can make them vulnerable to car collisions. Unlike other familiar owls, they do not hoot. Instead, barn owls make a noise more closely resembling a screech or scream.

On average, they only live about two years, a surprising statistic as they are a medium-sized predatory bird. Weighing in at 1-1.5 pounds and standing 12-16 inches tall, with a wingspan of 39-50 inches, they are nonetheless preyed upon by great horned owls, eagles, and peregrine falcons. 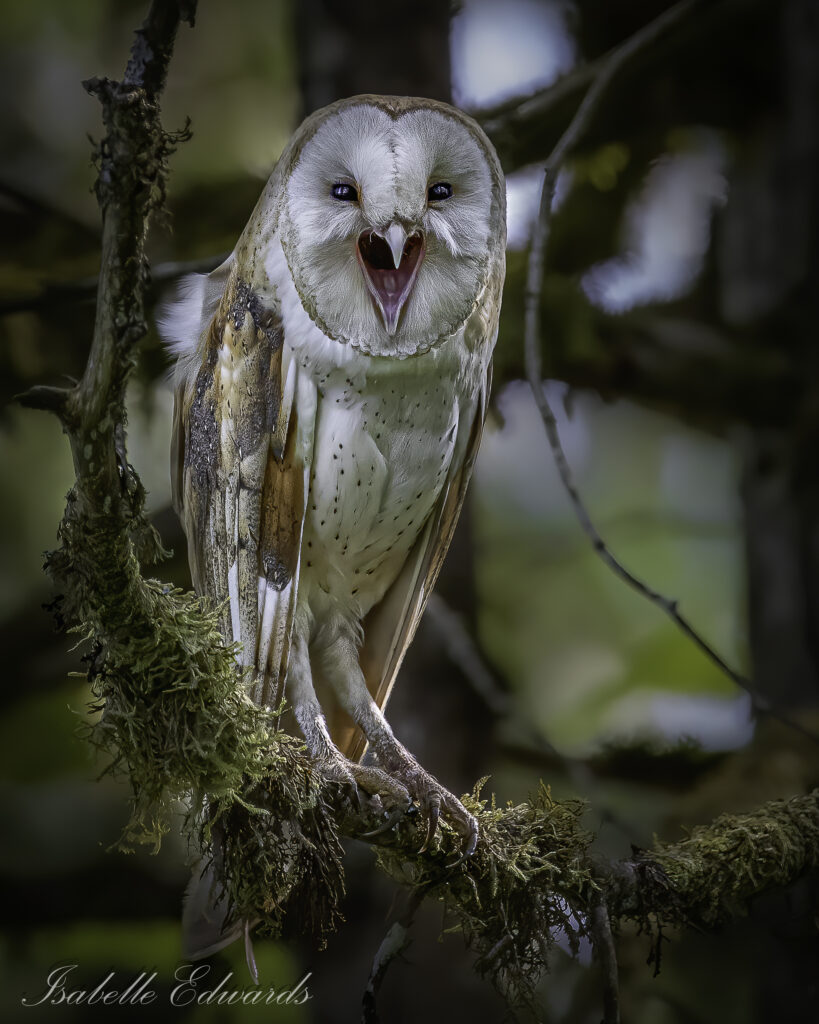 Barn owls are amazing hunters and have several adaptations that help them search for prey at night. Their forward-facing eyes have a high number of light receptive cells that are specialized for nocturnal hunting. Their eyes do not move much in their heads, so they have 14 vertebrae in their necks, which is seven more than humans! The extra vertebrae allow them to swivel their heads a whopping 270 degrees and perform a behavior called “head bobbing” which helps the owl better judge the position and distance of things around it.

Barn owls can hunt by sound alone, better than any animal ever tested. A barn owl can catch mice in a completely dark laboratory, under vegetation, or even under snow! Their ears are offset, or asymmetrical, and point in slightly different directions. This helps the owl pinpoint sounds. The feathers on their heart-shaped face, or “facial disk” collect sounds and direct them to the owls’ ears. Barn owls can even move their facial feathers to funnel sounds to hear better. Good hearing is essential since barn owls must catch at least 3-4 prey animals per night, hunting over an area of 700-1,800 acres (about 1-2.5 square miles).

A barn owl swiveling its head. What do you think it’s hearing?

Barn Owls and Their Prey

What do they eat? Mainly small mammals (mice, voles, shrews, rats, rabbits) and some birds. Since rats and other rodents are on the menu, farmers consider barn owls a valuable partner in rodent control in crops and often provide nest boxes for them. Barn owls’ unusually large wings relative to their lightweight bodies allow them to fly very slowly and hover with minimal effort. This slow flight pattern allows them plenty of time to scan fields for prey.

Adult barn owl bringing a prey item back to the box

Owls swallow their prey whole; some of the bones and fur are broken down in digestion, but owls regurgitate the undigestible bones and fur once or twice a day. These are what we call “owl pellets”. Owl pellets can sometimes be found at the base of trees where owls roost or nest. The female barn owl will use these pellets to make a simple nest inside a hollow or nest box in which to lay her eggs. By the end of the nesting season, the cavity box will be full of smashed down owl pellets. 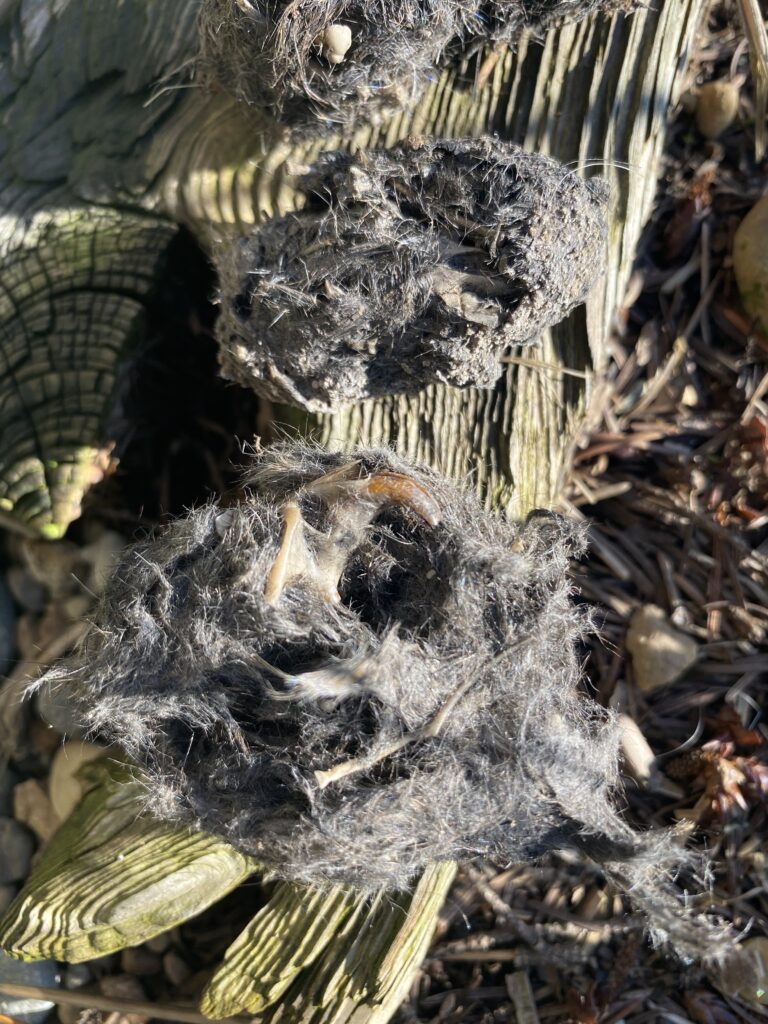 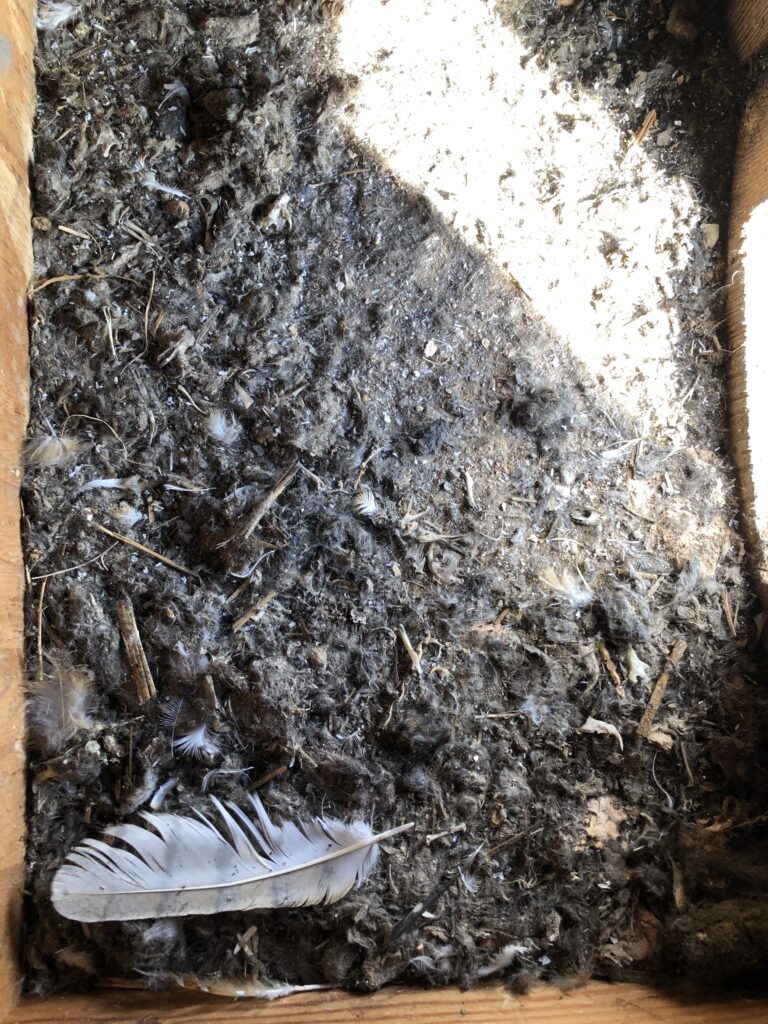 CLT volunteers cleaned out the Twin Rivers Ranch cavity box in October 2020 and went through the contents to see what the owls had been eating. Over 200 mouse and vole skulls were pulled out of the nest, along with parts of small birds, moles, and shrews! 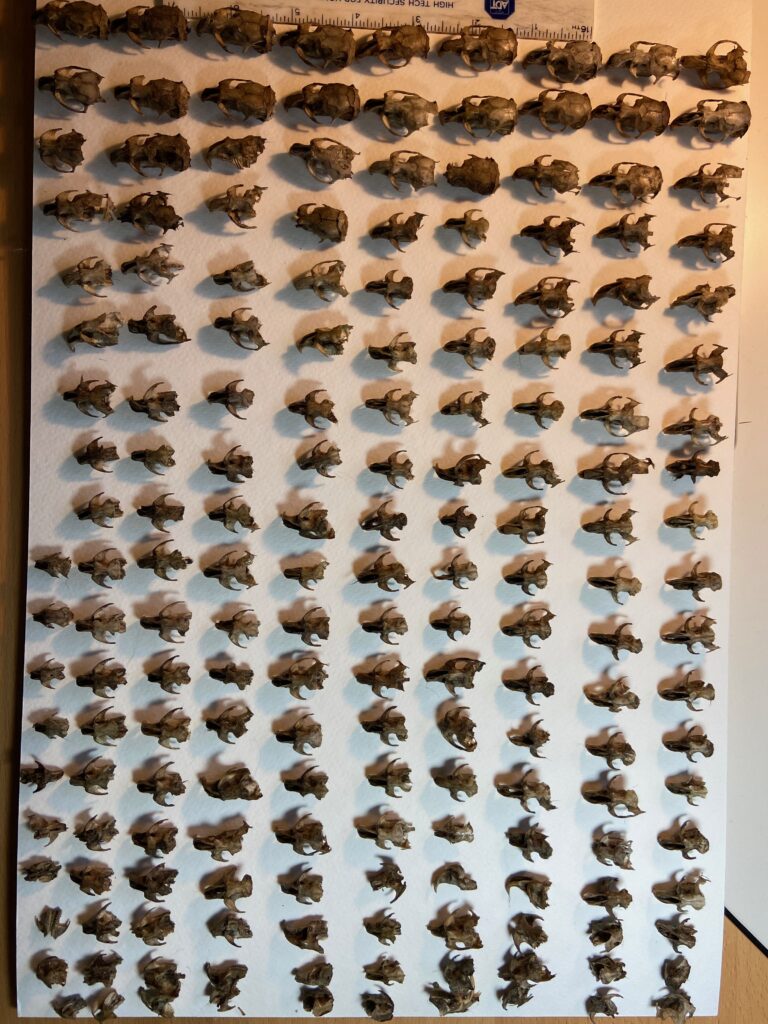 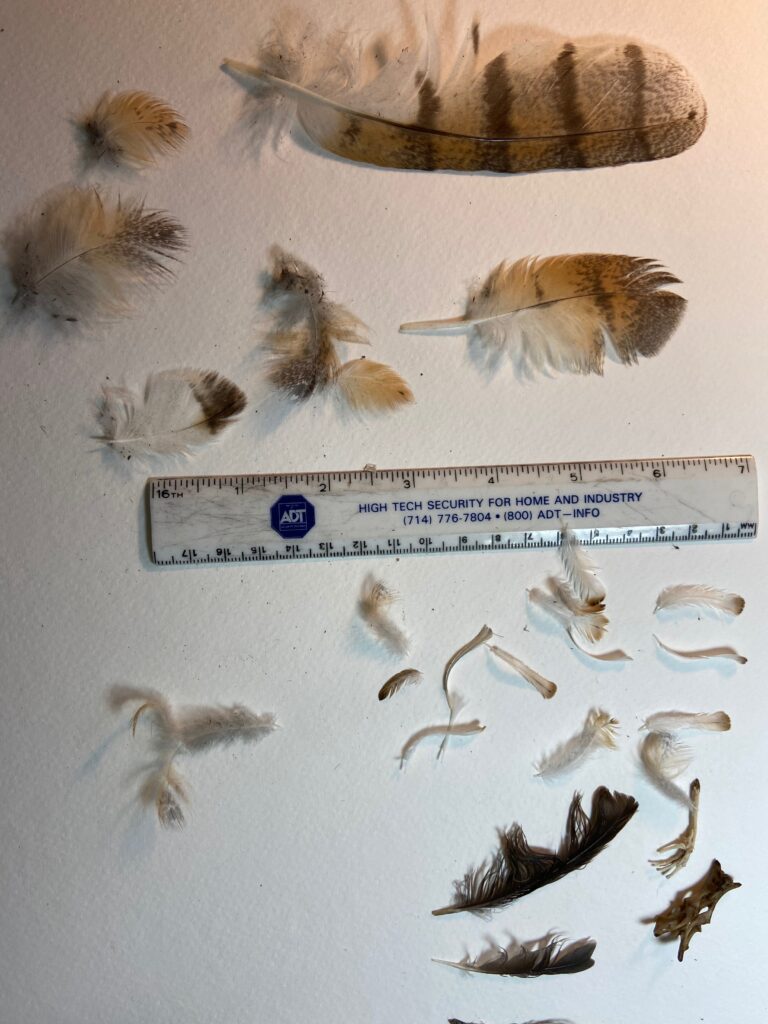 So, let’s talk about barn owls nesting. Barn owl pairs start to court in late winter and after about a month, the female starts to lay eggs every 2-3 days. Average clutch size is 5-7 eggs, and the female incubates them for about 30 days. During this time, her mate brings her food. He will often store excess food in the nest to feed the young nestlings.

Think about it – the male is now catching his 3-4 prey items and the female’s prey, so, 6-8 per night. Then, when the young birds hatch, he is responsible for not only those 8 prey items, but also the prey items for all the owlets. He was catching 15-20 prey items per night for the three owlets that hatched at Twin Rivers Ranch Preserve in 2021! Yikes! No wonder he wants to store excess for use. Once the chicks are a couple of weeks old, the female starts to hunt as well.

Chicks fledge at about 50 days after hatching. Fledging is an important stage in any young bird’s life because it means they have left the nest and are starting to learn how and where to get food and how to identify predators.

Owlet testing and strengthening its wings

The young owls are still dependent on their parents for food for several weeks after they leave the nest; then, they are on their own to survive and raise their own family in the coming year. All of this means that owls eat A LOT of rodents – by the time our 2021 chicks fledged, they and their parents had consumed between 600-800 prey items!

These beautiful birds remind us of the importance of conserving land and fostering a landscape that can support wildlife. Vehicle collisions, habitat degradation, and chemical poisoning continue to threaten this incredible species. Barn owls are part of a wide and deep ecological food web; they flourish where there are intact habitats with wide open spaces for them to hunt and appropriate nesting cavities for them to breed and carry on for generations. Twin Rivers Ranch Preserve is one of those places.

Telling this story is a reminder of our shared existence. Conserving land for this amazing bird ensures that future generations of humans will have natural landscapes in which to refuel and refresh, too.

Many thanks to Barb Morson for helping us write and research this story, to Mike for letting us borrow his trail camera when ours malfunctioned, and to our volunteer bird team Mark, Bill, Shannon, Ian, Sydney, and Tom!

Most of the barn owl information in this article comes from the Cornell University Ornithology Laboratory website.