It has been 10 years since Capitol Land Trust purchased Twin Rivers Ranch Preserve. During that time, CLT has been active in restoring the ecological health of the property. And that work continues!

We are excited to share the next step in Twin Rivers Ranch Preserve’s journey—the failing bridge crossing Cranberry Creek will be removed this year! If you’ve ever been to the Preserve, you may remember holding your breath as you drove across it. 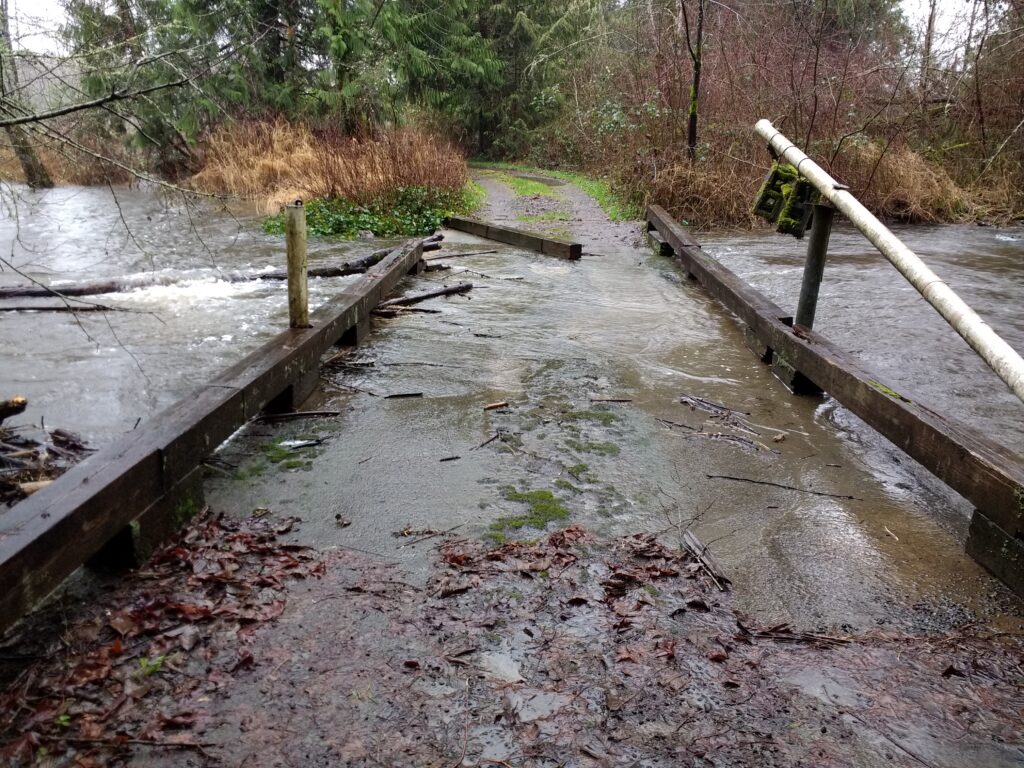 Cranberry Creek flowing over the bridge.

In partnership with the Squaxin Island Tribe, Mason Conservation District, the United States Department of Agriculture’s Natural Resources Conservation Service, and support from the Department of Ecology’s Terry Husseman Account, the removal of the bridge and nearby streambank armoring will allow the salmon-bearing creek to flow naturally and make space for native re-vegetation.

If you aren’t familiar with Twin Rivers Ranch Preserve, it is just north of Shelton and spans the entire northern shoreline of Oakland Bay. Its 133 acres protects the lower reaches of two salmon-bearing creeks (Cranberry Creek and Deer Creek) and their estuaries; 3,200 feet of Puget Sound shoreline; plus, wetlands, forest, and grassland. And its adjacent mudflats support aquaculture for local shellfish companies and the Squaxin Island Tribe.

The Preserve lies within the traditional territory of the Sa-He-Wa-Mish, who were sustained by the rich natural resources in the area. Native ownership of the property and Oakland Bay was lost in 1854 when the Medicine Creek Treaty went into effect.

Shortly thereafter (possibly as early as 1856), the land was homesteaded by the Jacob Ooley Eckler family. As logging operations expanded in the Shelton area in the late 1800s, a short railroad line was built diagonally across the property by the Shelton Logging Company for transporting logs. 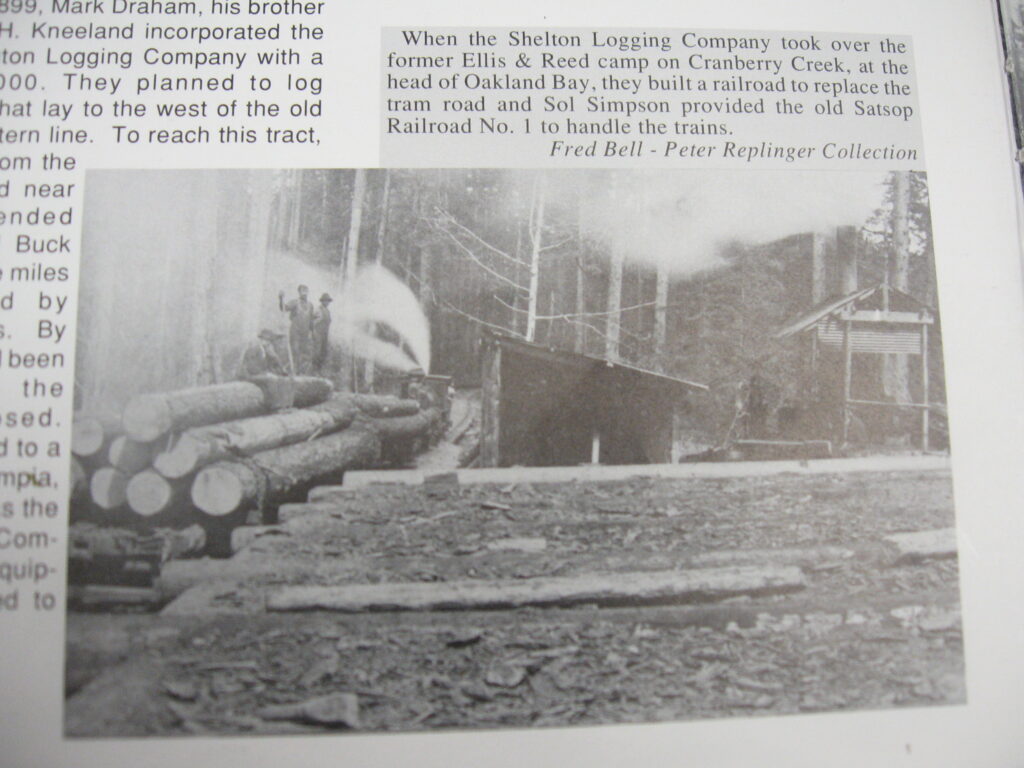 Historical logging operations at the preserve.

In 1916 a house was built next to Cranberry Creek and was probably used mainly as a hunting lodge. The Rohde family bought the land in 1972, named the area Twin Rivers Ranch, and began making agricultural improvements shortly after. These included ditches to drain the fields and infrastructure like a barn and outbuildings. They raised Black Angus beef cattle and grew hay pastures for 23 of the 38 years of their residency. 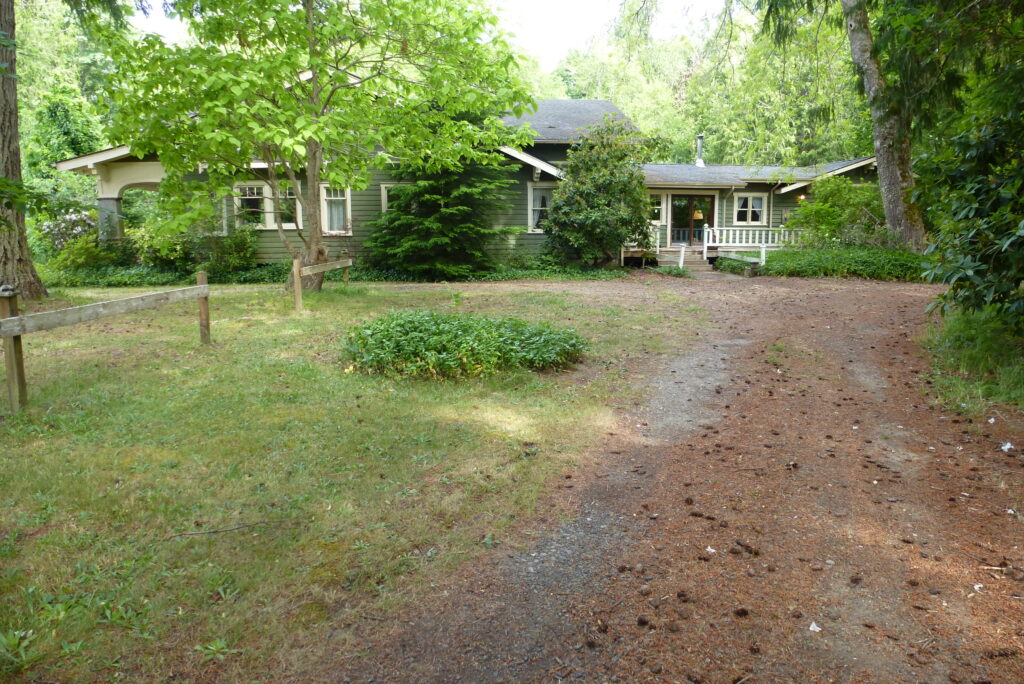 The house at the preserve.

Twin Rivers Ranch was purchased by Capitol Land Trust in August 2010 and renamed “Twin Rivers Ranch Preserve.” The conservation of this property was the result of 15 project partners working together, a clear demonstration that working strategically and collaboratively can be highly effective for sustaining and recovering the health of Puget Sound. The success of this project – and Capitol Land Trust’s conservation of the estuaries at Oakland Bay Historical Park and Bayshore Preserve – represent major contributions to the health of the Oakland Bay watershed.

When Capitol Land Trust acquired Twin Rivers Ranch Preserve, most of its fish and wildlife habitat was in good condition and its shoreline had not been modified at all. As a result, we’ve focused most of our attention on improving ecological functioning along the stream banks.

A healthy population of plants along a creek is called riparian vegetation. Riparian vegetation supports wildlife by cooling the water temperature and provides nutrients and shelter to the life in the creek through falling leaves, branches, and whole trees. The vegetation also improves water quality by filtering runoff from the surrounding land. 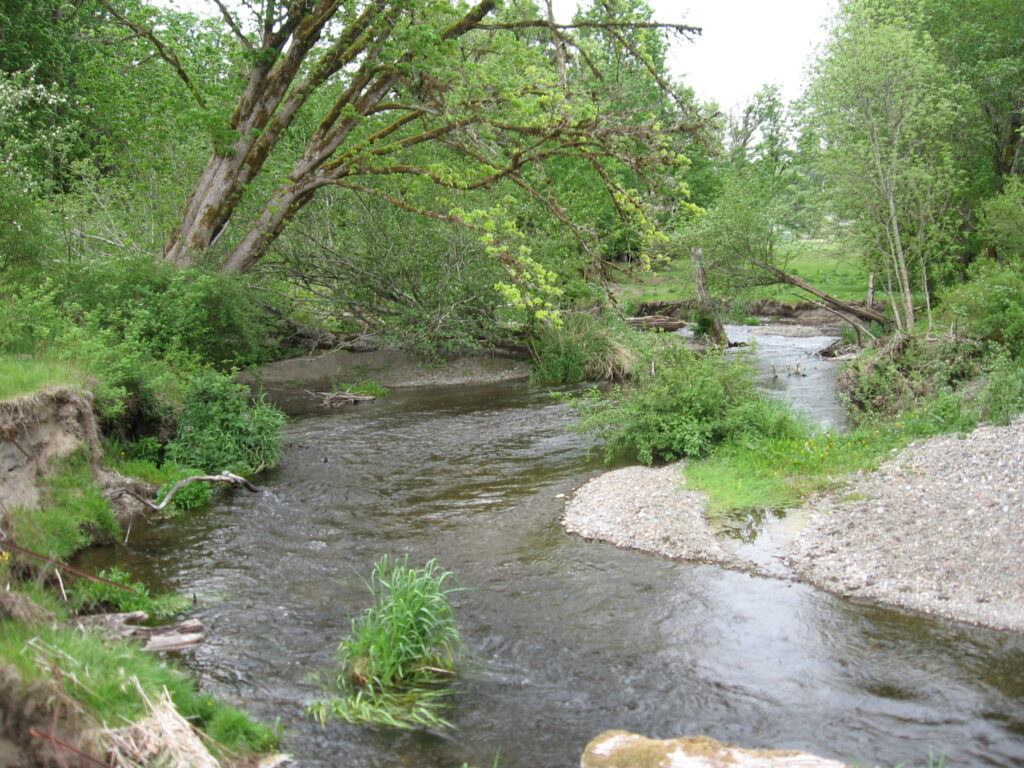 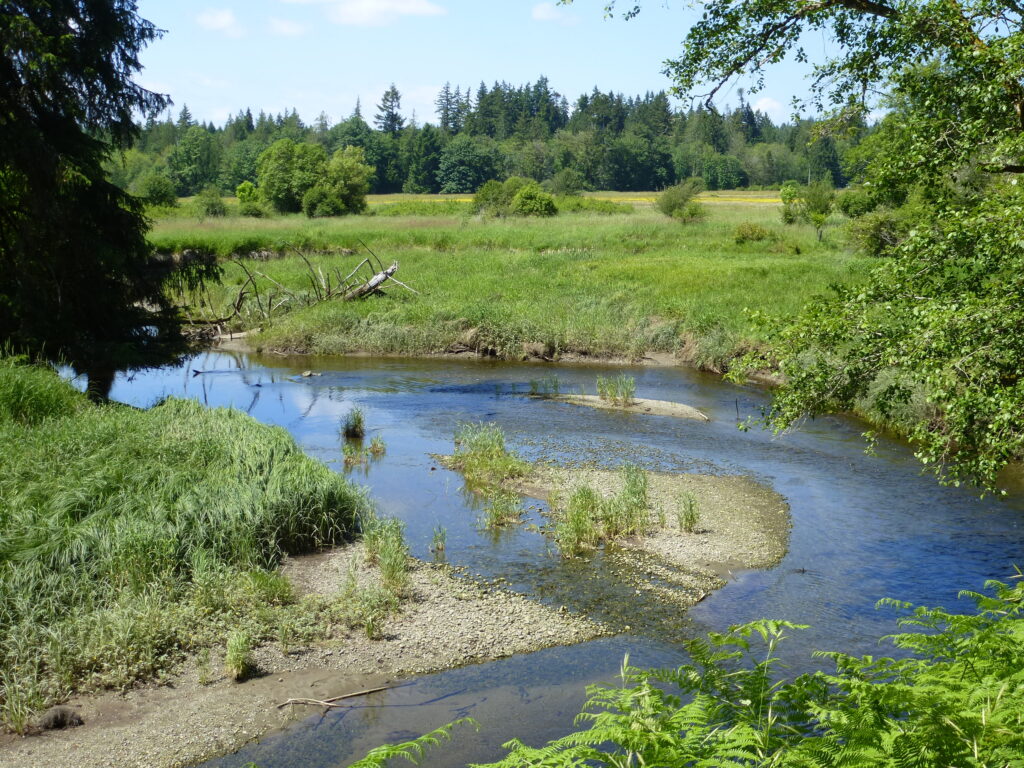 Since 2010, CLT’s volunteers and partners have been improving and expanding the riparian habitat along Deer and Cranberry Creeks by removing invasive weeds and replacing them with thousands of native trees and shrubs. This contributes to the overall health of Oakland Bay, which benefits the surrounding community. 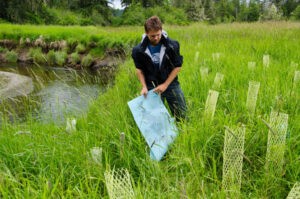 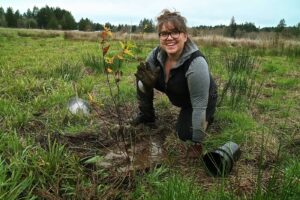 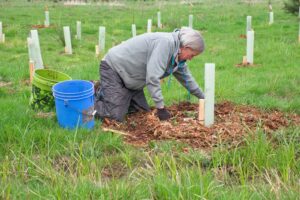 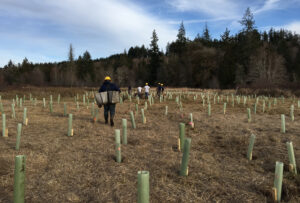 Remember the house that was probably used as a hunting lodge along Cranberry Creek in the early 1900s? After a house inspection determined that it would take about $100,000 to bring the house up to code, CLT investigated options for removing the house. Rather than tear it down, the house was sold to the Nickel Brothers (a house-moving company), who in turn sold it to retired carpenters in Sequim, WA. 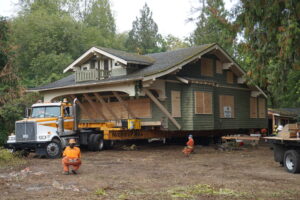 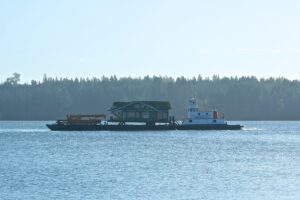 In 2017, the original Sears Craftsman house was detached from a later addition, lifted onto a moving platform, driven down State Route 3 to a loading site, put on a barge, and moved to Sequim—where it now sits on a new foundation and is being restored by its new owners. Read more on the house move here. 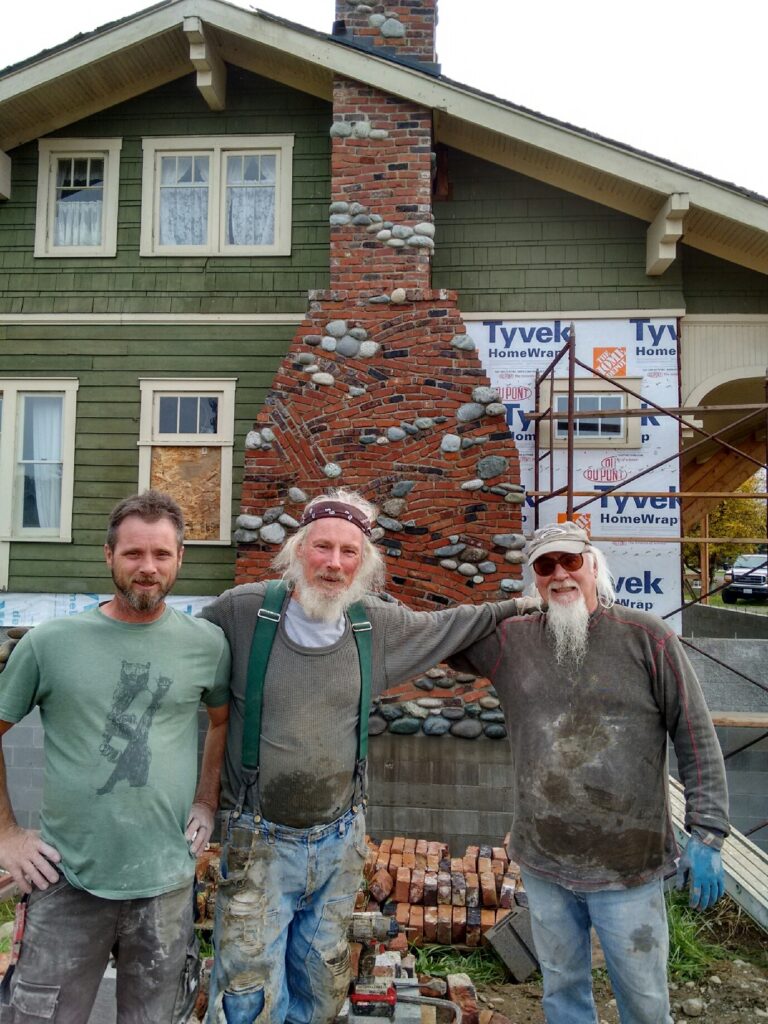 The house being remodeled in Sequim.

Twin Rivers Ranch Preserve has had quite the journey. We’re grateful for the partners and volunteers who have helped us make improvements along the way, and we know the bridge removal won’t be the last thing to be done. The conservation of this land and continuous improvements demonstrate a commitment by many to the health of Oakland Bay.